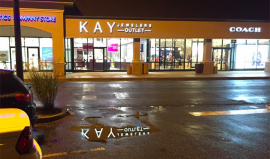 Signet Jewelers Limited claims to be the world's largest retailer of diamond jewelry and is clearly the largest specialty retail jeweler in the US, UK and Canada. It operates over 3,300 stores primarily under the name brands of Kay Jewelers, Zales, Jared The Galleria Of Jewelry, H.Samuel, Ernest Jones, Peoples, Piercing Pagoda, and JamesAllen.com. Just over a year ago the company was among the S&P 500, but its share price and market cap have fallen hard. Independent diamond industry analyst Paul Zimnisky in his latest article, "The Precarious but Opportunistic State of Signet Jewelers", takes a deep dive into the mixed fortunes of this diamond jewelry bellwether. Republished in full from Paul Zimnisky's Diamond Analytics with the analyst's generous permission, we present his in-depth look at Signet Jewelers.

The Precarious but Opportunistic State of Signet Jewelers

An unequivocal industry leader with a market cap exceeding that of Tiffany & Co. (NYSE: TIF) as recently as 2016, making it the largest jewelry company in the world at the time, Signet Jewelers (NYSE: SIG) has since rapidly fallen from its graces - at least when using the company’s share price as a proxy. Shares of Signet have fallen from a high of $151 a share, reached in October 2015, to a post-Global Financial Crisis low of $12 a share as of August 2019. At the high, Signet’s market cap exceeded $12 billion but has since fallen to under $700 million.

The deterioration of Signet can arguably be attributed to too rapid inorganic growth, probably marked by the $1.4 billion acquisition of Zales in February 2014, a too aggressive customer-credit strategy, various poor uses of cash and of course the casualty of being a U.S. mall-based retailer lacking a rapid transition to a more innovative omnichannel model.

By store count, Signet still remains the industry leader in the fragmented markets of the U.S., UK and Canada, with a market share by that measure of an estimated 10-20% in the U.S. and UK and 5-10% in Canada. Under recognizable brands, Kay, Zales, Jared, Piercing Pagoda, James Allen and H.Samuel, Signet currently operates 3,300 stores which is down from over 3,500 two years ago. By revenue, North America, primarily driven by the U.S., represents almost 90% of the company’s exposure, setting it apart from Tiffany for instance, which is globally diversified between the Americas, Asia-Pac and Europe.

With the company having such a significant presence in the U.S., which is the diamond jewelry industry’s largest end-consumer market by far, a prosperous Signet is very important for the larger diamond industry. By revenue, Signet accounts for an estimated 15% of the entire downstream diamond market in the U.S. and approximately 8% of the global market.

Further, Signet is vertically integrated to the mid-stream segment of the industry as a De Beers Sightholder, ALROSA Alliance member and also as a Rio Tinto Select Diamantaire. In addition, Signet owns a diamond manufacturing plant in Botswana, Africa. The company also works actively with other industry participants in order to support larger industry initiatives. For example, in collaboration with natural diamond industry trade group, the Diamond Producers Association, and certification bellwether, UL, Signet is working to provide the diamond trade with access to “objective and third party verified information” on man-made diamond screening equipment, a program referred to as “Project ASSURE.”

In an effort to get the company back on track, Signet’s management and board recently initiated multiple major restructuring activates. Over the last two years, Signet has sold and outsourced its ~$2 billion customer credit portfolio, bought leading online diamond retailer R2Net (parent of James Allen) for over $300 million, closed hundreds of mall-based stores, upgraded its omnichannel platform and made multiple executive level and upper-management changes.

In December 2018, Signet opened a high-tech James Allen concept store in Washington D.C., following a trend of other e-commerce companies opening “smart” brick-and-mortars. The store brings a more forward-looking image to Signet, and if successful Signet will likely open more. In February of this year, Signet brought on three new creative agencies to innovate marketing and branding efforts.

The company’s most recent restructuring foray, which it referrers to as its “Path to Brilliance” is targeting over $200 million in total net cost savings via merchandise procurement efficiencies, headquarter consolidation and payroll efficiency strategies over the next two years. The plan is scheduled to reach completion by January 2021. For context, the company’s operating income is guided at just over $200 million for the fiscal year ending January 2020.

Signet’s fiscal 2020 sales guidance was set at $6.0 billion as of June, which compares to actual revenue of $6.3 billion in both fiscal 2019 and fiscal 2018. Gross margins in the two previous years were ~35%, defined as sales minus cost of sales divided by sales. Operating income, or income before interest and tax, in fiscal 2019 was negative $765 million after $965 million in one-time restricting charges primarily related to the customer credit portfolio transaction, store closures and various impairments. In fiscal 2018, operating income was $527 million. To put these figures in perspective, the company’s sales high watermark was $6.6 billion in fiscal 2016 and the high operating income was $763 million achieved in fiscal 2017.

As of the most recent reported quarter ending May 2019, the company held $639 million in long-term debt and had $195 million in cash. Worthy of note, the company has $1.6 billion in lease obligations, which the company now has to disclose on the balance sheet as a liability in accordance with Financial Accounting Standards Board guidelines that were recently adopted by the company. The lease liability is offset by an “operating lease right-of-use” asset in the amount of $1.8 billion. This metric can make the company appear much more leveraged.

If Signet can deliver on the guidance this year, emphasizing the if, the company should generate enough cash to pay down an estimated $90 million in debt even after maintaining the current common stock dividend of $1.48 per share, which currently yields over 12%. This is assuming that the depreciation expense this year offsets the guided capital expenditure of approximately $145 million. For reference, depreciation last year was $184 million and $203 million in the year prior.

The company’s top-line guidance is, of course, sensitive to macro-economic factors, which are becoming more of a concern as of late. In the U.S., which represents the large majority of Signet’s exposure, the U.S. Federal Reserve recently cut the Fed funds rate by 0.25% which marked the first rate cut since mid-2007. On August 14, the U.S. 2/10-year yield curve inverted for the first time since 2007. While an inversion is historically seen as pending recession signal, the impact of non-traditional factors on the curve, such negative interest rates abroad, make the implication more difficult to read. None-the-less, there are mixed economic signals in the U.S. at the moment which is creating uncertainty and could impact consumer sentiment and spending near-term.

The economic picture in the UK, which represents about 10% of Signet’s exposure, is undoubtedly weaker than the U.S. as Brexit weighs on the economy while an overall weakening Europe, which might already be in a recession, is impacting the region as a whole.

In order to deliver on the guidance, Signet also needs to maintain operating margins, which are under threat given the trade war. On an analyst call in early June, management said the company’s “exposure to Chinese goods is approximately 30% of our merchandise spend.” Given that a 10% tariff on Chinese jewelry imports is set to take effect on September 1, 2019, Signet will likely try to offset some of the effect by negotiating pricing terms with Chinese suppliers but also in some cases switching exporters.

While the concern over the future of traditional American retail is justified, Signet perhaps has an advantage over more general merchants given that it is a specialty retailer and a clear market leader from not only from the standpoint of its store presence but also brand recognition. Buying diamond jewelry can be an intimidating purchase, and there is certainly comfort in buying from a recognizable brand with a transparent return policy.

Longer term, if Signet can successfully leverage its omnichannel strategy with a strong digital and ecommerce platform, execute on marketing, take advantage of growing segments of the market like self-purchasing women and man-made diamonds and prudently manage cash while maintaining an industry-leading presence, the company should be able to maintain staying power in this niche industry.

Paul Zimnisky, CFA is an independent diamond industry analyst and consultant based in the New York metro area. He publishes regular analysis of the diamond industry in his State of the Diamond Market, a leading monthly industry report.

Image source: Paul Zimnisky. A Kay Outlet store in New Jersey that has since been closed given a redundant Zales in the same mall.