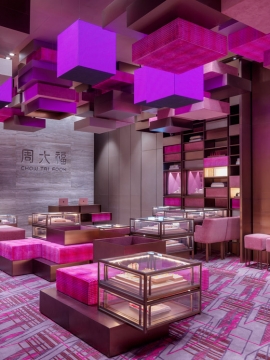 Chow Tai Fook Jewellery Group (CTF) has reported higher sales and continuing expansion of their POS (points of sale) during Q1 FY 2020 (three months ended 30 June 2019), as sales in mainland China stores continued to grow at a strong rate while those in Hong Kong and Macau declined for the second time in the past three quarters. Retail sales grew by 24% in mainland China during the period, with same-store sales (SSS) improving by 11%, the jeweler reported. Retail revenues in Hong Kong and Macau fell by 6%, while SSS dropped further, down 11%. The market in Hong Kong and Macau was "affected by a tough base comparison and cautious consumer sentiment amid an uncertain [economic] environment,” CTF said.

In Mainland China, gem-set jewelry saw healthy growth of 8% on a SSS basis, but declined by 16% in Hong Kong and Macau as consumers "held back spending." The increased contribution from new POS also played its part in boosting the retail sales value growth of gem-set jewellery to 18%. CTF added 115 points of sale (POS) in the country during the Quarter, including a net opening of 113 Chow Tai Fook Jewellery POS, 18 of which are self-operated and 95 are franchised. Three Chow Tai Fook Jewellery POS were opened in Singapore, Korea and the Philippines. As at 30 June 2019, the Group had 3,248 POS in total. Revenue from gold jewelry surged 12% in China, as the average weight per product sold increased, as did the average selling price. Sales of gold jewelry dropped 13% in Hong Kong and Macau.

Meanwhile, “the continuing impact of [the] US-China trade war on market sentiment” has been partially blamed for a 10% drop in Luk Fook's sales in the three months ending June 30. In a quarterly sales update, the Hong Kong-listed jewelry retailer said a relatively higher base in the comparable period last year, when same-store sales increased 22%, also contributed to the decline. Increased sales volumes helped offset a significant drop in the selling price of gem-set jewelry.