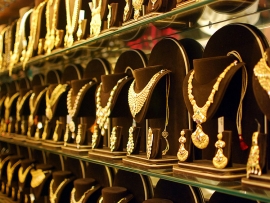 To the chagrin of the gem & jewelry industry in the county, the Indian government last Friday (July 5) announced it would increase the import duty on gold and precious metals to 12.5% from current level of 10%. The move will raise the price of gold, silver and other precious metals on the domestic market, with concerns that smuggling may rise and tourists may seek to purchase their gold elsewhere. India is one of the largest gold importers in the world, arising mainly from demand from the jewelry sector. India imported gold worth $32.8 billion during 2018-19.

The Chairman of The Gem & Jewellery Export Promotion Council (GJEPC), Pramod Agrawal, said the industry was “greatly disappointed with the increase of import duty on precious metal, gold and silver” announced by Finance Minister Nirmala Sitharaman at the presentation of the Annual Budget 2019. This, along with the continuation of the existing duty structure on diamonds and colored gemstones, “will result in growth of business in neighbouring countries as the foreign tourists will stop buying jewelry from here and processing of larger diamonds will shift to competing countries like China, Vietnam”, the Chaiman added. GJEPC also said that with cost of doing business going up, export competitiveness will go down, also resulting in job losses.

The GJEPC has sought further reduction on the import duty on gold and precious metals, as well as a reduction in import duty on cut & polished diamonds from 7.5% to 2.5% as part of the Government’s focus on enhancing exports and strengthening India’s positioning as a world leader in the diamond cutting and polishing business. Agarwal added, "The gem & jewelry industry is going through very tough times with decline in exports and job losses, and the industry expected some positive announcement as encouragement to our sector. GJEPC had represented for reduction in import duty for raw material inputs like gold, diamond and coloured gemstones to get some blocked capital released." The opposite has happened.

The World Gold Council has said the decision to increase import duty on gold "will negatively impact India’s gold industry. This will impede efforts to make gold as an asset class particularly when gold prices are already rising globally. In addition, the grey market will thrive which will dilute efforts to reduce cash transactions. Millions of Indians invest in gold as part of their household savings, not simply as discretionary spending for consumption. People buy gold as a long-term investment to protect their wealth and gold also has huge significance socially, emotionally and economically in India. An increase in duty will be counterproductive ... We believe that gold can play a positive role in the Indian economy, but to enable this; there needs to be a reduction in overall taxes, a stable policy environment and a transparent trading market.”

Surendra Mehta, national secretary, India Bullion & Jewellery Association (IBJA) said, “We are completely taken aback by FM’s decision to hike import duty on gold. The industry had asked for a reduction in import duty by at least 2 percent. If the FM was not able to reduce it, she should have at least maintained it at 10 percent. This will lead to more illegal entry of gold in the country.” Shares of jewellery makers such as Titan and PC Jeweller fell as much as 5% after the announcement. Jewellery trade associations have asked India’s government to reduce gold import duties, which has caused a surge in smuggling.