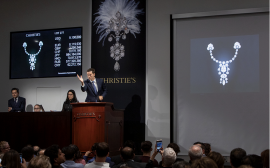 Christie's Maharajas & Mughal Magnificence collection earned a total of $109,271,875 in New York, representing the highest amount taken in by any auction of Indian art and Mughal objects, and the second highest for a private jewelry collection - falling just short of the 2011 auction of Elizabeth Taylor’s jewelry, good for a nearly $116 million haul. Almost 400 lots were offered, ranging from legendary Golconda diamonds to dazzling coloured stones, jeweled objects used in the royal courts to swords and daggers once owned by Indian rulers. Bidders came from 45 countries, including significant institutional bidding.

The collection featured a number of outstanding Golconda diamonds, including the Mirror of Paradise and the Arcot II. The latter, which has a storied past that includes the Nawab of Arcot and Queen Elizabeth II, sold for $3,375,000 (its estimate was $2-4 million). The former, a rectangular-cut diamond of 52.58 carats, achieved $6,517,500, below its $7-10 million estimate. Later, an extremely rare, large portrait-cut diamond of 20.22 carats fetched $1,095,000.

"Beginning with the sale announcement in April, there has been an overwhelming response to this exceptional collection," said Rahul Kadakia, International Head of Jewellery at Christie’s, after the sale. "Momentum has been building from the international tour to the New York exhibition culminating with the excitement witnessed in the saleroom." Multiple lots cruised past their estimate, and after 150 of the near 400 lots were sold, 10 had gone for more than $1 million. A world auction record was set for an Indian/Mughal huqqa, or water pipe at $759,000The penultimate lot of the sale, The Shah Jahan Dagger (the Shah's personal dagger), sold for $3,375,000, (hammer price $2.8 million), beating its $1.5 million to $2.5 million estimate and establishing the record price for an Indian jade object and the record for a piece with Shah Jahan provenance. When the final lot — The ‘Taj Mahal Emerald’ brooch by Cartier — sold for $1,815,000, the marathon auction was 93 per cent sold by lot and 92 per cent sold by value.