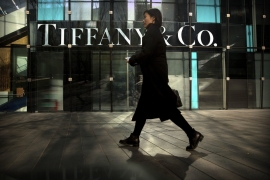 Tiffany & Co. reported a modest decline in global sales in the first quarter, impacted by unfavorable foreign exchange rates and 'dramatically' lower worldlwide tourist spending, which was mitigated by strong local sales. The famous jeweler announced that in the first quarter, worldwide net sales declined 3% to $1.0 billion, down from $1.03 billion in Q1 2018, and comparable sales declined 5%; on a constant-exchange-rate basis, however, net sales were equal to the prior year and comparable sales declined 2%.

“Our first quarter results reflect significant foreign exchange headwinds and dramatically lower worldwide spending attributed to foreign tourists," said Alessandro Bogliolo, Chief Executive Officer. Tiffany & Co.’s US sales to Chinese tourists fell by more than 25% last quarter, a trend that is worsening as a trade war escalates between the two countries. The jeweller first started seeing cracks in tourist spending a year ago, and the situation has further deteriorated over the past three quarters. The problem is likely to be exacerbated by a travel warning issued yesterday by China’s Ministry of Culture and Tourism, dissuading potential tourists from visiting the US because of “frequent” shootings, robbery and theft. State-run television network China Central Television said US law enforcement agencies had “repeatedly harassed” Chinese travellers.

Despite the rising tensions, Tiffany's reports a continuation of strong growth in mainland China. Bogliolo states, "we were pleased that, at the core of our business, global sales attributed to local customers, led by sales in China, grew over last year’s very strong sales results." He adds, "We believe this growth in sales to local customers reflects progress," concluding that, "Tiffany is positioned for improving trends in the second half of 2019."

Net sales in the Americas, where the most Tiffany stores are located, fell by 4% to $406 million, while same-store sales in that part of the world felll by 5%. European sales fell 4% to $102 million while same-store sales were down 7%. And in Asia-Pacific, total net sales declined 1% to $324 million and comparable sales declined 5% due to the effect of foreign currency translation; again, on a constant-exchange-rate basis, total sales rose 3% and comparable sales were equal to the prior year. These sales results also reflected lower spending attributed to foreign tourists.

Sales results by jewelry category in the first quarter were as follows: Jewelry Collections rose 1%, gaining 4% on a constant-exchange-rate basis; Engagement Jewelry declined 6% and Designer Jewelry fell by 14%.