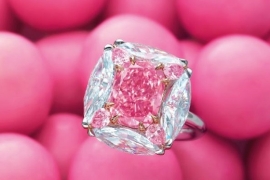 An extremely rare, 3.43-carat internally flawless cushion cut diamond referred to as the 'Bubble Gum Pink' has sold for an impressive $7.5 million at Christie’s Hong Kong auction, or $2.2 million per carat. The ‘Superb Colored’ gem was the premier lot sold during the Magnificent Jewels event held by the famed auction house, which fetched a total of $44.6 million.The stone is mounted onto a ring designed by luxury London jewellers Moussaieff, alongside other pink diamonds and marquise shaped white diamonds.

Described by the Gemological Institute of America (GIA) as a "Fancy vivid purplish pink cushion modified brilliant-cut diamond of 3.43 carats" featuring pear-shaped pink diamonds, marquise-cut diamonds and gold, Christie's Chairman Francois Curiel said it is “Probably the strongest pink I have ever seen in my 50 year life of jewelry specialty at Christie’s. What is very rare about it, is it is also internally flawless, which means it has no imperfection whatsoever.” Christie's estimated the diamond would sell for $6 - $8 million.

Other headline articles included: the The Grand Muzos, a pair of 23.34/23.18 carat classic Colombian emerald earrings, weighing an impressive 23.34 and 23.18 carats, each including a white diamond and a pearl which sold for $4.5 million; and a 11.69ct F/IF diamond and 1.02ct Fancy Vivid Green-Blue diamond necklace by Bulgari sold for $1.575 million; and a cut-cornered rectangular step-cut, 3.01-carat, fancy-vivid-blue diamond ring with two heart brilliant-cut, fancy-intense-purple-pink diamonds on either side, was withdrawn from the sale. The piece was valued at $4.7 million to $7 million.