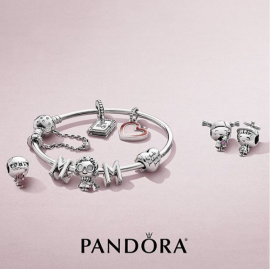 Jewelry maker Pandora, known for its charm bracelets, intends to make another 1,200 workers in Thailand redundant while speeding up its marketing spend as its new CEO looks to turn around the struggling jewelry maker after another disappointing quarter. The company already laid off 700 of their nearly 14,000 employees in Thailand, which is almost half of its 32,000 global workforce. The jeweler commented, "As expected, Q1 2019 financials were weak and impacted by the commercial reset initiated as part of Programme NOW." Late last year, the retailer said it was planning a 'reset' after cutting its outlook and abandoning a long-term sales goal.

Pandora is currently testing a number of commercial initiatives as preparation for the brand "re-launch", which is expected to double marketing investments in Italy, the United Kingdom and China by bringing in celebrities and digital media “influencers” in an effort to boost sales. Pandora says the initiation of significant marketing investments in key countries, which are launching in May 2019, will be the most important test after like-for-like sales fell 10 percent in the quarter due to a decline in shopper numbers at its stores. Pandora expect the marketing investments show the potential to drive profitable revenue growth. The need to grow revenue appears urgent, as global sales fell 6% to $720.5 million (DKK 4.8 billion) in the latest quarter (January - March) compared to the same period a year ago. Revenue in the US fell 12% to $146.5 million (DKK 977 million), while sales in China picked up considerably, gaining 15% to $82.2 million (DKK 548 million). Global net profit declined 31% to $119.5 million (DKK 797 million).

"We have some very strong fundamentals in terms of a world-class supply chain, a strong product proposition as well as a deep reaching distribution network that gives consumers all around the globe quality access to Pandora," said Alexander Lacik, President and CEO of Pandora? However, he adds, "The brand as well as the company has reached a point of maturity and it is not without some serious challenges." Lacik last month took the helm at Pandora after former CEO Anders Colding Friis was ousted last year in a bid to regain investor trust after several profit warnings. The stock is still down around 60 percent over the past year.