Global Gold Demand Up 7% in Q1, Driven by Indian Jewelry 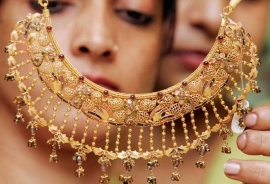 In China, the traditional boost from the Chinese New Year holiday was not strong enough to counter the headwinds from the slowdown in the domestic economy, particularly against the background of the international trade conflict, and relatively volatile gold prices. The US, the third largest gold jewelry market after China and India, saw its ninth consecutive quarter of y-o-y growth, gaining 1% to 24 tonnes, but the pace of expansion slowed notably. European jewelry demand slipped 1% to 12.7 t – on a par with Q1 2017. The regional weakness was chiefly due to losses in the UK and France, where demand was hit by the fragile economic outlook and political uncertainty.

Global gold demand grew to 1,053.3t in the first quarter of 2019, up 7% on the same period last year, according to the World Gold Council’s latest Gold Demand Trends report. This year-on-year increase was largely due to continued growth in central bank buying, as well as growth in gold-backed exchange-traded funds (ETFs). The jewelry sector constitutes just over 50% of total demand. China continued to be the largest market with demand at 184.1 t, a 2% decline from the 187.5 t registered in Q1 2018. India, where demand rose 5% from 119.2 t last year to 125.4 t this year, boosted global demand along with the US where demand increased for the ninth consecutive quarter, gaining 1% to 24 t – the highest Q1 total since 2009. Demand in Turkey, another significant market continued to be hit by a decline in local currency vis-à-vis the dollar that pushed gold prices higher, with gold jewellery demand dropping 12% during the quarter to 8.9 t.