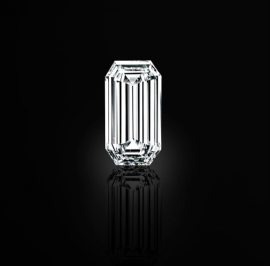 A spectacular and comprehensive trove of nearly 400 diamonds, colored stones and the finest jeweled objects from the Mughal Empire (1526-1857) to the present day, with provenance including the royal and noble families of India, will be offered in a landmark auction this June at Christie's in New York. Christie’s anticipates the Maharajas & Mughal Magnificence jewelry auction could rank as one of its most high-profile and high-value jewelry auctions ever, featuring some incredible diamonds such as The Mirror of Paradise (pictured), a 52.58-carat D color Internally Flawless Golconda diamond, and The Arcot II, a 17.21-carat D color IF diamond given to Queen Charlotte of Great Britain by a regional ruler in India.

"India’s rich culture of jewelry is partly the result of natural circumstance," explains Rahul Kadakia, Christie’s International Head of Jewellery. "The mines of Golconda yielded the highest grade of diamonds; Kashmir produced the rarest and most beautiful sapphires; while the greatest emeralds arrived in India from Colombia through commercial exchange via the Portuguese-controlled ports of Goa. Jewellery in the Mughal tradition was an integral aspect of articulating authority, and eyewitness accounts demonstrate how highly Mughal rulers valued gems for their rarity, physical properties and provenance." See some highlights of the collection here.

“The collection begins in Mughal India, the most important dynasty that ruled the country, famous for its emeralds, diamonds, sapphires, rubies, jeweled weapons and objects that are bejeweled beyond belief,” said François Curiel, chairman of Christie’s Europe. The Mughal Empire (1526–1857) at its zenith commanded resources unprecedented in Indian history and covered almost the entire subcontinent. The auction lots include significant necklaces, such as the Imperial Spinel Necklace and a diamond rivière necklace containing nearly 200 carats of Golconda stones from the collection of the Nizam of Hyderabad. The collection has already been on display at Christie's London and will embark on a tour to Geneva, New York, and Hong Kong before the 19 June sale.

The Al Thani Collection Foundation will be opening a museum space at the Hôtel de la Marine in Paris in Spring 2020. Located on Place de la Concorde in the heart of Paris, the space provides for the long-term display of works drawn from across the entire Collection. The 400m2 gallery will host a permanent exhibition alongside a programme of themed shows.