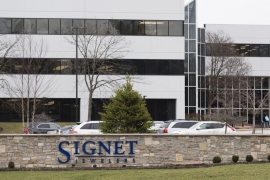 Earlier this year in a cost-cutting move, Signet Jewelers, which claims to be "the world's largest retailer of diamond jewelry," asked its employees in Akron, Ohio and Dallas, Texas to apply for a "Voluntary Transition Program" out of the company. “Based on participation," the company wrote, "we may need to take additional actions including an involuntary reduction-in-force.” The message wasclear enough: take the buyout or risk being fired without one. Not enough people took the severance package and assistance in finding a new job voluntarily, and the firings have arrived. Retail employees were not included in the transition program.

Signet has declined to say how many were affected or the cost savings Signet expected to realize from the action. “Though this was a difficult decision," said spokesperson David Bouffard, "it was necessary as we focus on identifying cost savings to invest in the business initiatives that will help us deliver inspiring products and ideal online and in-store shopping experiences to our customers.” Earlier this month, Signet announced it would closing its manufacturing facility in Dallas, resulting in the loss of over 100 jobs. Signet employs nearly 3,400 people at its two headquarters: about 2,600 in Akron and 800 in Dallas, where Zales is headquartered.