U.S. Jewelry Sourcing Regulations May Get Much Stricter 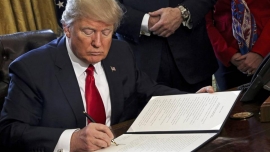 Several diamond and jewelry industry sites are reporting that the U.S. State Department may be prepraring to strengthen and enforce disclosure requirements for all materials used in jewelry. State Department representaitives met with a coalition of industry leaders in New York to explain the new potential regulations. According to Rob Bates at JCK, "The United States believes that jewelry materials and other minerals are funding conflict and rogue regimes, specifically mentioning Iran, Venezuela, and certain countries in Africa, said attendees. But it’s also interested in more than those areas."

One industry members who attended the meeting told Bates, “[The government] wants to know where every part of a piece is sourced. Not just the diamond or gem, but the gold, everything. It’s a broad stroke across the industry,” the attendee said. “It’s about knowing the source for any piece of material that is imported.” Attendees of the meeting made it clear that the concern of the US government about the provenance of jewels comes straight from the administration, and that it seemed serious. The move comes as at least as somewhat as a surprise, as President Trump has been widely rumored to have set his sights on repealing Section 1502 of the Dodd Frank Act - commonly known as the conflict minerals rule - the aim of which is to deal with the problem of the slave mining of certain minerals coming out of DR Congo. His claim is that it should be replaced because it is not effective, and perhaps this new announcement indicates how the administration intends to do it. The State Department is known to desire a revamping of the Kimberley Process, which it views as ineffective and inadequate, particularly regarding its unwillingness to expand the definition of 'conflict diamonds' to include human rights - which is what Section 1502 was designed to do in the first place in regard to the DRC and surrounding countries.

Michelle Graff of National Jeweler concludes, "While such regulations would have a tremendous impact on the jewelry industry in the United States, which sources the vast of majority of its materials from overseas, there are few details available at this point, including when - or even if - the regulations will go into effect, what they will entail for jewelry importers and how they will be enforced." She adds, "In the meantime, [those attending the meeting] recommended suppliers and jewelers ensure they follow all existing sourcing requirements, including the Clean Diamond Act, the World Diamond Council’s System of Warranties and the KP, and that their anti-money laundering (AML) programs are up-to-date and active."