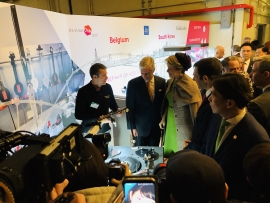 The Antwerp World Diamond Centre (AWDC), the umbrella organization of the Antwerp diamond industry, participated from 24 to 28 March in the Belgian State Visit to South Korea, where they co-organized an event to highlight a new partnership between Antwerp and Korea's leading jewelery brand, Golden dew. During the State Visit, and in honor of the jeweler's 30th anniversary, Golden dew launched three special cuts it developed together with three different Antwerp diamond companies.

In recent years, Korea’s diamond market has become highly interesting for Antwerp diamond traders, demonstrating great potential, but a 5% import tax on polished diamonds has slowed Antwerp's expansion into the Korean market. However, the relationship between the two countries has intensified recently, with a City of Antwerp trade mission in 2016, a three-day visit by Korean jewelers to the Antwerp diamond industry in 2017 and now the State Visit, in which the Antwerp diamond industry played a leading role. During the State Visit, three special diamond cuts were presented to the general public in the presence of the Belgian royal couple. Golden dew developed these cuts together with three Antwerp diamond companies: IGC Group, S. Muller & Sons Diamonds and Mikisa Gems. These cuts were selected as the most original designs from a competition that the AWDC and Golden dew organized for Antwerp diamond companies.

"The unveiling of these special new diamonds, which Golden dew will market exclusively throughout the country, is a major step forward," said AWDC CEO Ari Epstein while addressing the press. "It is an announcement of our shared intentions to move forward with this relationship, and it is time to turn this mutual interest into an official, long-term partnership. In order to do so, however, we need the barrier at the legislative level removed. It is of critical importance to the future of the diamond trade between Belgium and South Korea that the Free Trade Agreement signed in 2011 is allowed to do what it was designed to do, and this includes removing the 5% import duty on polished diamonds. We firmly believe that this 5% tax is the only thing standing in the way of a flourishing relationship that Antwerp diamond traders and South Korean jewelers are keen to see materialize. A robust diamond trade between our two nations will bring tremendous benefits to all of us … and ultimately to Korean consumers." As it now stands, Antwerp is at a competitive disadvantage compared to other trade centers that are already exempt from paying this import tax.

The IGC Group, in collaboration with Golden dew, developed the ‘Golden dew cut’; a unique cut with a teardrop shape (the ‘dew shape’) that HRD Antwerp has certified. S. Muller & Sons introduced to the Korean market the EightStar cut, which gives a diamond more fire and brilliance than is found in a traditional brilliant cut. Finally, Mikisa Gems created the UltraBrights cut, which uses a special technique to improve the light optimization and brilliance of very small stones. Golden dew will distribute these three Antwerp special cuts exclusively throughout Korea, at the more than 100 shops they run across the country.