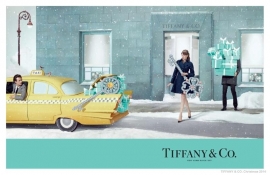 Tiffany & Co. last week reported record sales and net earnings for the full year 2018 despite its holiday sales failing to meet expectations due to external events, economic uncertainties, and market volatilities. Worldwide net sales rose by 7%, reaching a record $4.4 billion due to growth in all regions and higher spending attributed to local customers and foreign tourists. Net earnings were $586 million, compared with $370 million in the prior year, notwithstanding a 1% worldwide net sales decline to $1.3 billion. During the fourth quarter, the retailer saw weakening demand in many of its key markets, including flat sales in the U.S. region and slight declines in China and Europe.

Bogliolo said its new markting strategy was a key driver of higher sales. "Our strategy to amplify and evolve the brand message was highlighted with bold brand messaging in the 'Believe In Love, Believe In Dreams' and holiday campaigns. These campaigns came as a pleasant surprise to our audience and signaled that something new and exciting was starting to happen at Tiffany." The CEO also pointed to the jeweler's new transparency initiative concerning the country or region of origin of their individually registered diamonds, as well as high-profile product placement including the visibility of the legendary 128-carat Tiffany Yellow Diamond with Lady Gaga at the Oscars as positively impacting overall sales. "I believe that as a result, sales growth in 2018 came from our existing customer base, as well as from new customers and former customers who have not shopped at Tiffany in a number of years."

The company's guidance for fiscal 2019 includes the expectation that net sales will continue to rise by a low-single-digit percentage over 2018, as the lower foreign-tourist spending it encountered in the fourth quarter continues into the new fiscal year. However, higher expenses incurred from efforts to stimulate growth, as well as sales pressures from the effect of a stronger U.S. dollar, lower foreign tourist spending and comparisons to strong growth in last year’s first half are expected to have a negative impact on earnings this year.

Looking forward this year, Bogliolo said the company will add some important openings in key cities. "We just completed the relocation of our most important store in (Syndey) Australia. In the next week, we will celebrate the grand opening of our newest location in the US ... our first store in Washington DC. We plan to announce other important new stores in key markets, such as in Greater China during the course of the year." He added that the company is upgrading its website globally, and on their US website, they have just begun offering online sales of select, love and engagement diamond rings.