The UK Loads Up on Swiss Watches Fearing Brexit Disruption 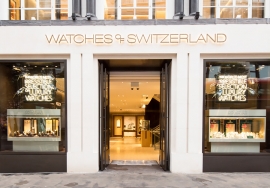 After a small rise in January, export growth in the watch industry gained momentum in February, according to figures from the Federation of the Swiss Watch Industry. The industry exported goods worth the equivalent of CHF 1.8 billion francs ($1.8 billion), up 3.4% from February 2018. However, a 58 percent surge in shipments to the U.K. in February accounted for 80% of the increase worldwide and is explained by stockpiling ahead of Brexit. In the first two months of the year, the U.K. imported 242 million Swiss francs ($242 million) of timepieces from Switzerland.

The trend in the principal markets varied widely in February, casting doubt on the strength of exports overall, which rose 3.4%. Excluding the U.K., growth would have amounted to just 0.7%, in line with the trend of the previous month, said one analyst. Shipments to Hong Kong ($246 million) and the U.S. ($174 million), the two biggest markets, declined by -3.8% and -6.6% respectively, mainly because of a particularly unfavorable base effect. After falling for two months, China ($174 million) bounced back strongly, gaining 15.1%. Japan ($118.5) saw a nearly 20% increase for the second month in a row while Singapore jumped 19% to $118.5 million, an unprecedented level of growth for February.

The Federation noted that demand for luxury timepieces priced at over CHF 3,000 ($3,000) continued to show strong growth, a trend that has now been almost uninterrupted for nearly two years, while items selling for $200 and less fell by 15%.