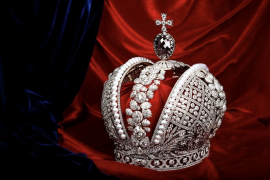 Altogether, the piece features 11,352 polished diamonds with the total weight of 1,180.00 carats, mostly round brilliants, as well as fancy-cut pear-shape diamonds. In the centre of the “hoop” one can see a large oval-cut diamond weighing 10.11 carats. All the diamonds were sourced from Russian miner Alrosa, certified by the Gemological Institute of America (GIA) and cut and polished at the Smolensk Kristall Production Corporation. The sparkle of the diamond lace is emphasised by two rows of large natural white sea pearls, 74 in total. The crown is crested by a rare a pear-shaped, 384.71-carat, purple tourmaline. Since its debut nine years ago, the crown has been on display in various Russian cities, including the State Hermitage Museum in Saint Petersburg and the State Historical Museum in Moscow. It has also been exhibited at museums and shows in the Netherlands, Belgium, Israel, Hong Kong and the US, and has won several jewelry and art awards.

The Imperial Crown of Russia, known also as the Great Imperial Crown of the Russian Empire, was the principal symbol of the power of the Russian monarchs and their main regalia from 1762 until 1917. All the Emperors and Empresses of Russia, beginning with Ekaterina II the Great were crowned by it. Crown was last used during state event in 1906 at the festive ceremony of the opening of the first State Duma in the presence of the last Russian Emperor, Nicholas II. At present it is part of a permanent exposition in the Treasury of the Diamond Fund of the Russian Federation. The form the Crown constitutes two silver semi-spheres symbolizing two parts of world – Europe and Asia, the West and the East, united under the Russian Empire.