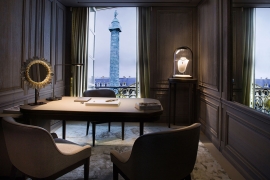 LVMH Moët Hennessy Louis Vuitton, the world’s leading luxury products group, recorded revenue of €46.8 billion in 2018, an increase of 10% over the previous year. LVMH's results have upset prevailing wisdom about the health of China’s shoppers with its latest results. The luxury bellwether, which owns some of the world’s most valuable brands including Christian Dior and Givenchy, said Tuesday that demand from Chinese consumers strengthened in the three months through December, defying analysts' expectations for a decline in luxury spending.

Organic revenue growth was 11%, and 10% in the fourth quarter, continuing the trend that has been underway since the beginning of the year. The group reported continued growth in Europe, the United States, Asia and Japan, citing an excellent year for Bvlgari and good development of Hublot and TAG Heuer, as revenue from jewelry and watches increased 8% in 2018 to €4.12 billion ($4.71 billion). Profit from recurring operations (comparable store sales) was up 37%, reaching €703 million ($803.5 million).

Bernard Arnault, Chairman and CEO of LVMH, commented, “LVMH had another record year, both in terms of revenue and results. In particular, profit from recurring operations crossed the €10 billion mark. The desirability of our brands, the creativity, and quality of our products, the unique experience offered to our customers, and the talent and the commitment of our teams are the Group’s strengths and have once again made the difference."

As the Wall Street Journal notes, "Most surprising is the pickup in spending by Chinese shoppers mentioned by management on a call with analysts. While LVMH doesn’t break out figures for mainland China, sales in Asia grew 15% in the three months through December, better than the 11% recorded in the previous quarter." This runs contrary to investor sentiment leading shareholders to dump luxury stocks in recent months amid mounting fears that falling stock-market valuations and trade tensions will hurt Chinese shoppers, the WSJ adds.