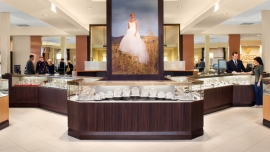 Signet Jewelers, the United States' largest retailer of diamond jewelry, announced its same-store sales fell 1.3% to $1.84 billion during the "Holiday Season" (the 9 weeks ended January 5, 2019) as the company failed to get enough demand from its legacy product lines and enough traffic in their stores during key weeks in December. For the current quarter ending Feb. 2, it now expects same-store sales to be down 1.6% to $2.5%. The retailer's shares tanked more than 21 percent Thursday morning after the diamond retailer slashed its sales and profit outlook for Q4 and FY19, but has started to recover as the day wears on.

"Our holiday season performance fell short of our expectations," said Virginia C. Drosos, Chief Executive Officer. "Early improvements in refreshed merchandise assortment, digital marketing and OmniChannel were more than offset by larger than expected declines in legacy product lines. In addition, the competitive promotional environment we saw early in the season intensified in December and, despite our increased promotional investments, we experienced reduced traffic during key December gifting weeks. Combined with higher than expected credit costs, these factors negatively impacted our profitability."