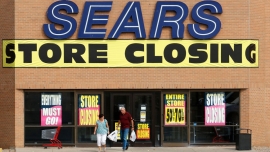 Rosy Blue and Vijay Gold Designs, two of Sears Holdings Corp.'s prominent jewelry suppliers, have challenged the retailer's plans to liquidate 142 stores in bankruptcy, saying some of the inventory they have furnished to Sears was on consignment. On October 15, Sears - once an innovative icon of the retail industry - filed for Chapter 11 in New York federal court to provide restructuring and financial relief for the organization. The company plans to close 142 additional stores (it has already shuttered 300 stores in fiscal 2018 and 3,000 over the last five years) and liquidate all of the inventory at those closing stores, "whether they own it or not."

In separate court filings Monday, Rosy Blue and Vijay Gold - the trading name for Shanti Corporation - filed limited objections challinging the whether Sears has the right to dispose of their consigned goods. The filings of both companies read, “In the store-closing motion, the debtors seek authority to, among other things, liquidate all of the inventory at the closing stores, whether they own it or not.” The filings further read, "The store closing motion fails to address the inventory belonging to Rosy Blue/Vijay Gold or other consignors and fails to provide for any adequate protection to Rosy Blue/Vijay Gold or other consignors in connection with the store closing sales." They add that courts have rejected sales of such consigned goods absent adequate protection to or consent from the consignment vendors, citing the 2008 bankruptcy of Whitehall Jewelers as precedent.

As JCK's Rob Bates explains, "The judge in the Whitehall case, following a contested hearing, blocked plans by Whitehall’s backers to sell its consigned merchandise and keep the proceeds for itself, ruling the company needed to have either adequate protection for or assent from the consignors before it launched the sales." Rosy Blue and Vijay have perfected their interests in the merchandise in accordance with the Uniform Commercial Code, filing a legal statement ensuring the jewelry would not be mislabeled as Sears’ assets in the case of bankruptcy." Even so, Sears' consignment suppliers have reason to fear, writes Retail Dive, following the 2016 Sports Authority bankruptcy, whichcalled into question who had rights to the proceeds of consignment inventory sold in liquidation sales. A similar case of suppliers shipping to a retailer in Chapter 11 is the Toys R Us scenario, which proved disastrous for suppliers that kept shipping to the toy seller while it had essentially defaulted on its debtor-in-possession loan and faced liquidation. As Retail Dive points out, "There is no guarantee the same that happened to Toys R Us and Sports Authority suppliers could not happen to Sears suppliers," but Bates says of the Sears case, "so far the judge has indicated a desire to protect the companies with merchandise on consignment."