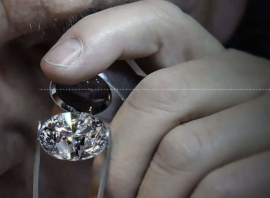 Leading Hong Kong jewelry retailer Chow Tai Fook is the latest company to turn to blockchain technology to enable its customers to know the origin and authenticity of the diamonds they are buying. Backed by the Gemological Institute of America (GIA), which will grade the stones sold in CTF's T Mark-branded stores, developed with leading blockchain solutions provider Everledger and secured by the IBM Blockchain Platform, the new service will show exactly where the diamonds came from and what quality they are, said Alan Chan, Chow Tai Fook Jewellery Group’s general manager of group branding.

“The retail industry is undertaking a digital revolution, and this serves as one of the key drivers of this pioneering initiative,” said Chan. The move follows De Beers' foray into blockchain earlier this year with its “Tracr” pilot, which was launched in January with the involvement of five diamond manufacturers and UK retailer Signet Jewellers. “Nowadays," Chan continues, "young consumers often show interest in the entire cycle of diamonds, and therefore there is a growing importance for jewellers to help ascertain the origin and authenticity of gemstones by leveraging modern technology.” The information will be available via the T Mark app. By digitalising the diamonds’ certificates of authenticity, shoppers will in future be able to access a blockchain record of any they buy from the company, writes Joanna Lam for the South China Morning Post.

The first phrase will see the initiative rolled out for diamond sales from four of its stores in Hong Kong – Causeway Bay, Tsim Sha Tsui, Mongkok and Tuen Mun. So far, officials say 3,000 T Mark diamond reports are ready on its blockchain, and that coverage will eventually be extended to 10 stores and 10,000 diamonds for sale.