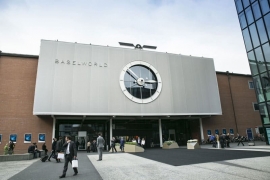 Following the recent announcement by CEO Nick Hayek Jr. that the Swatch Group would be packing up its 18 brands - including Omega - and its approximately 50-million dollar budget and heading for the exit at BaselWorld, the renowned watch and jewelry trade fair is facing a future of uncertainty. Hayek's statement about Swatch's departure was blunt and clear as a bell: “Today everything has become more transparent, fast-moving, and instantaneous ... In this new context, annual watch fairs, as they exist today, no longer make much sense. This does not mean that they should disappear. But it is necessary that they reinvent themselves, responding appropriately to the current situation and demonstrating more dynamism and creativity. At the moment, the trade fairs are failing to do so. The MCH Group, which organises Baselworld, is clearly more concerned with optimising and amortising its new building than it is in having the courage to make real progress and to bring about true and profound changes. For all these reasons, Swatch Group has decided that from 2019 onwards, it will no longer be present at Baselworld.”

As the world’s largest watchmaker, the Swatch Group, to be sure, is a key player at Baselworld, and is not the only brand to have left the building. In the past couple of years, there has been a mass exodus of watch brands, led by Girard-Perregaux and Ulysse Nardin. This year, there was no Hermès or Dior. Only 650 exhibitors were present at Baselworld 2018, down 50% from the year before – and the fair was shortened by two days. As more and more brands are deserting Baselworld, blaming high costs and insufficient returns, the Salon International de la Haute Horlogerie (SIHH), a private invitation-only event for the industry insiders in Geneva, is gaining in popularity. Meanwhile, the fallout within Baselworld has been swift, as René Kamm, CEO of MCH Group - the parent company of Baselworld - has resigned “by mutual agreement,” though direct criticism levelled by Swatch's CEO Hayek, saying the Basel fair has "always acted very arrogantly", with Kamm "always disappearing", certainly did not help.

Officially, the MCH Group said Mr Kamm had agreed, “the time has come for a change” after almost 20 years at the company. They announced its chairman, Ulrich Vischer, would take over operational leadership until a successor to Mr Kamm was appointed. This change of leadership also follows the departure of Sylvie Ritter last May from her post as managing director of Baselworld, a post she had held for 15 years. But, as Kim Soo-Jin reports for the South China Morning Post, while Baselworld is slow and outdated, it has shown it is willing to change. The MCH Group recently hired a new managing director for the fair, Michel Loris-Melikoff, who officially started his post on July 1. The announcement promised enhancements to the fair; "But it might just be a case of changes happening too little too late," she writes.

The MCH Group, according to the Financial Times, said it “deeply regrets” Swatch’s decision, which it admitted would have an “as yet inestimable” effect on its 2019 results, but said it would not prevent Baselworld from continuing. And for the time being, of course, it certainly will. Rob Bates, in a recent article taking stock of the watch industry's view of BaselWorld, writes, "U.S. retailers that regularly attend Baselworld tell JCK that (for now) they still plan to go, since that’s almost a requirement when doing business with certain brands. Still, they think Swatch’s defection could be potentially pivotal." One retailer told JCK, “Other brands will be thinking about their future plans. The future of the fair will be determined by Rolex, Patek Philippe, and Swatch.” Bates writes, "Another said he will continue to attend if Rolex and Patek still exhibit. But if they stop, all bets are off. While the fair is clearly in crisis, most hope the current tumult will spark much-needed changes." Yet another told him if changes do occur, Swatch will return. But it is up to the trade fair in Basel, and indeed those around to the world, to stay relevant in a rapidly changing environment of direct digital access and flexible distribution. The clock, as they say, is ticking.