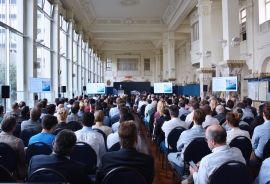 A full house at the Antwerp Diamond Bourse, including stakeholders from across the spectrum of the diamond industry, greeted De Beers Group representatives Paul Rowley and Nimesh Patel as they explained the company's foray into the synthetic diamond jewelry market and reinforced its commitment to the natural diamond industry. The famous miner's announcement in late May that they will be launching a new brand of fashion jewelry containing laboratory-grown diamonds (LGDs), called Lightbox, sent shock waves throughout the diamond industry, said AWDC CEO Ari Epstein, and people in the trade were hungry to have their questions and concerns heard and answered. The De Beers representatives answered the call.

Paul Rowley, De Beers Executive Vice President of Diamond Trading, spoke about De Beers' continuing commitment to its core business. "We remain dedicated to the diamond industry", he said, highlighting the massive investments De Beers continues to make into its mining and marketing operations, with the recent announcement of the $81 million takeover of Peregrine Diamonds illustrating his point. "That amount is just for the acquistion for the resource itself", added Chief Financial Officer Nimesh Patel, "which will increase significantly as we set out to build a mine. We would not be buying Peregrine if we did not believe in our core business." The speakers also explained in depth De Beers commitment to promoting natural diamonds, pointing out that De Beers will spend $170 million on marketing this year across the Diamond Producers Association (DPA - $70 million), Forevermark and De Beers Jewellers, on top of its exploration work and blockchain traceability tool Tracr.

It is no secret that De Beers posesses enormous technological and production capabilities concerning LGDs; its subsidiary Element Six has been growing synthetic diamonds for more than 50 years for a variety of applications - from drilling and machining to optics, acoustics and electronics. In this respect, it just seemed a matter of time before they converted that capability into gem-quality production, which they have now done, along with starting construction on a $94 million production plant in Oregon in the U.S. Paul Rowley set out to explain why the company decided now was the time to venture into the field, all the while emphasizing De Beers will remain a diamond miner. On this point, he reminded the audience that the capacity of Lightbox's Oregon plant will be 500,000 carats rough for 200,000 carats polished, compared to the 34 to 36 million carats of rough they will mine this year. Retail sales of Lightbox are targeted at $160-200 million, compared to $5-6 billion in rough sales and the $82 billion retailers earn globally from diamond jewelry sales. A drop in the proverbial bucket. "It is not 'our' business," Rowley said, "It's 'a' business."

Moving on to the 'why', firstly, he said that De Beers has conducted extensive consumer research, and quite frankly, consumers want low price-point quality diamond jewelry for everyday use, and have become hip to the LGD trend. Patel added that about 1,000 retail stores in the U.S. are already carrying LGDs in their product range, and LGDs currently have about 3% of the market share - effectively quashing the complaint that De Beers is legitimating the synthetic market all on its own. It is already legitimate; Lightbox is simply consistent with consumer desire, Rowley said, and consumers are already interested in synthetics. Lightbox is tailored to what they want: colorful, sparkling but high-quality fashion jewelry with transparent and accessible pricing. Indeed, the price structure is linear - increasing on an incremental basis according to carat weight - rather than exponential. The diamond(s) in a 0.25-ct piece of Lightbox jewelry will cost $200; 0.50-ct will cost $400, up to 1 carat at $800; whereas natural pricing for those sizes would be more like $400, $1,500, $4,000 (very rough estimate). De Beers' LGDs will not be sold as loose stones.

And while the De Beers gentlemen left no doubt that Lightbox is intended to be a profitable business, the main points they emphasized throughout the entire meeting is that this move was made to address the issue of consumer confusion about diamonds and LGDs by clarifying natual and LGD diamonds as two entirely different products: one is for play, and one has "inherent value", a phrase they often repeated. The main confusion Lightbox is intended to address is the marketing pitch, promulgated by synthetic producers and many retailers, that lab-grown is a direct substitute for natural diamonds. This is not only confusing, but deceptive. "Consumers understand that natural diamonds have inherent value," Patel said, "and that LGDs cannot have the same value. But they walk into a store, where the products are presented as having a similar value proposition, and get confused. The result is that they stop purchasing both." He said there is a place for LGDs as complementary to natural stones, but not as a competitor. Lightbox will help clarify this confusion.

To illustrate, he related the story of one consumer from their research: a young woman said she would like to have jewelry like Lightbox to wear to the beach. If she lost it, "It's no big deal." She would lose her investment of a couple hundred dollars, but it would "not mean anything." A piece of real diamond jewelry, however, is a different story, and this is what De Beers intends to identify as it differentiates the categories. "An LGD is not 'forever', but it's perfect for right now," they explain. "One should not buy LGD for important moments in life." A real diamond is a totally different value proposition. They, and the industry, are relying on consumers understanding this message, and buying into it. "This is not legitimizing or transforming the LGD industry," Rowley concluded. "It is already there. We see continued strong demand for natural diamonds."