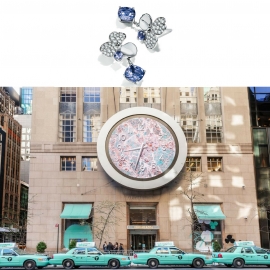 In celebration of the launch of its spring campaign, "Believe In Dreams", as well as their largest new jewelry collection in nearly a decade, “Tiffany Paper Flowers”, Tiffany and Co. has transformed its corner of New York City with its iconic blue hue. Tiffany & Co's marketing blitz took a New York icon, the city's famed yellow cabs, and painted them with the brand's trademark robin's egg blue. A select number of subway stations have also been made over in the same shade. The move celebrates chief artistic officer Reed Krakoff's first jewelry collection for the label, which is themed around that iconic Holly Golightly moment from the Breakfast at Tiffany's film, in which Audrey Hepburn's character stands in front of a Tiffany window with a coffee and croissant, one of the most famous moments in film history.

New Chief Artistic Officer Reed Krakoff's first jewelry collection is called “Tiffany Paper Flowers”, including both high and fine jewelry, and takes its inspiration from paper flower petals that are pinned together. "Inspired by petals scattered by the wind and delicately pinned back together", the promo reads, "the new Tiffany Paper Flowers collection reinterprets nature's mosts essential forms." Platinum petals are accented with diamonds and secured with a platinum pin. Colored gemstones like tanzanite, and colored diamonds, such as yellow diamonds, add pops of color throughout, and were meant to mimic the hues of irises and fireflies, Tiffany said. “Paper Flowers is about stripping away all of the rules associated with fine jewelry,” Krakoff said in a release announcing the new collection. “Luxury shouldn’t always mean formality, so we used precious stones and the finest materials, but in a way that you can live with every day.”

Paper Flowers encompasses pendants, earrings, bracelets and rings. The collection starts at $2,500 and caps off at $790,000. A representative for Tiffany said the introduction of Paper Flowers marks the biggest jewelry launch for the American jeweler since 2009’s Tiffany Keys collection. Krakoff, the longtime accessory and fashion designer, last year became Tiffany & Co.’s chief artistic officer, a newly created position, and was the catalyst behind the New York City Fifth Avenue flagship store’s refurbishment and a permanent café, where shoppers can literally have breakfast at Tiffany’s. The campaign included surprise performances from BMX bikers and skateboarders, as well as coffee carts handing out complimentary coffee and croissants.