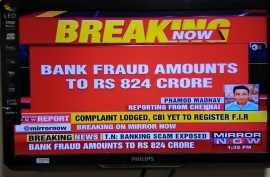 After the $2 billion worth of fraud allegations against Indian jewelry tycoon Nirav Modi and Gitanjali Gems chief Mehul Choksi shocked the Indian diamond industry, the last thing it needed was more bad news, which is precisely what they got. Jewelry chain Kanishk Gold, which also owns the Krizz jewelry brand, has been named in defrauding 14 banks, including the Punjab National Bank (PNB) and the State Bank of India (SBI), for an amount close to as $126.4 million, or Rs 824 crore. Taking into account interest due, the loss to banks exceeds $153 million (Rs 1,000 crore). The SBI has sought the help of the Central Bureau of Investigation (CBI) in investigating the case. The promoters and directors of the company, Bhupesh Jain and his wife Neeta, are said to have fled to Mauritius.

Times of India explains that according to the SBI, the jeweller first defaulted in March 2017 on interest payments to eight member banks. By April 2017, Kanishk stopped payments to all 14 banks. The bankers were unable to contact the promoter when it initiated its stock audit on April 5, 2017. On May 25 2017, when bankers visited Kanishk's corporate office, factory and showroom - the facilities were shut with no activity and no stock. On the same day, Bhoopesh Jain wrote a letter to his bankers admitting falsification of records and removal of stocks -- secured as collateral to the lenders. Subsequent visits by the bankers to the other showrooms of the jeweller revealed that they had also been locked. A representative from the Madras Jewellers and Diamond Merchants Association said, "The company shut down as early as May 2017 since it couldn't cope with the losses." SBI was the lead bank in a consortium of 14 public and private sector lenders to give loans to Kanishk. In a letter to the CBI dated January 25, 2018, SBI charged Kanishk with "manipulating records, shutting shop overnight."

Kanishk Gold has a credit history dating back to 2007. In 2008, the SBI took over the firm’s loans from ICICI Bank. At that point, they amounted to $7.7 million in working capital and $1.5 million in term loans. In March 2011, this was converted into a multi-bank arrangement with the Punjab National Bank and the Bank of India. In 2012, a consortium with the SBI as the lead bank, sanctioned metal gold loans to Kanishk, supposedly to purchase gold bullion from government-nominated bullion-dealing banks in the consortium.