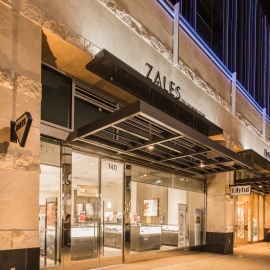 Signet Jewelers same store sales declined 5.2% in the fourth quarter and declined 5.3% in full year fiscal ended February 3, 2018, the company announces at the conclusion of a self-described "challenging year". At the same time they announced two additions to its Board of Directors, appointing Sharon L. McCollam and Nancy A. Reardon as Independent Directors effective March 13, 2018. "These appointments will further strengthen the Board’s expertise and breadth of experience as Signet launches its “Path to Brilliance” transformation strategic plan." As part of the "Path to Brilliance", the company announced it was ready to close more than 200 stores this year as part of a three-year turnaround plan.

For the year, Signet's total sales were $6.3 billion, down $155.4 million or 2.4%, compared to Fiscal 2017. The total sales decline was driven by a decline in base same store sales, partially offset by benefit of the extra 14th retail-calendar week of sales worth $84.3 million, as well as the addition of R2Net (acquired in September 2017) which contributed $88.1 million in sales for the year. Same store sales, which excluded the impact of the 53rd week from its calculation, decreased 5.3% compared to the prior year. R2Net sales were up 29.9% compared to the prior year and had a 40 bps positive impact on total company same store sales.

For the fourth quarter, Signet's total sales were $2.3 billion, up $23.2 million or 1.0%, in the 14 weeks ended February 3, 2018 (Q4). The total sales increase was driven by the extra 14th retail-calendar week of sales, worth $84.3 million, as well as the addition of R2Net (acquired in September 2017) which contributed $64.4 million in sales in the quarter, offset by a year-over-year decline in base same store sales. Same store sales, which excluded the impact of the 14th week from its calculation, decreased 5.2% in the fourth quarter Fiscal 2017. R2Net sales were up 35.0% compared to the prior year quarter and had a 90 bps positive impact on total Company same store sales in the quarter.

"Fiscal 2018 was a challenging year for Signet," said Signet Jewelers Chief Executive Officer Virginia C. Drosos. "We gained sales momentum in our Zales banner in the fourth quarter as our strategic initiatives began to take hold, but we experienced challenges at our Kay and Jared banners, including execution issues related to the first phase of our credit outsourcing transaction." They also announced the launch of the “Signet Path to Brilliance” transformation plan, a three-year comprehensive transformation plan to reposition the Company to be a share gaining, OmniChannel jewelry category leader. The three-year plan includes cost efficiencies, a portion of which will be reinvested in growth initiatives including 1) eCommerce growth; 2) OmniChannel capabilities; and 3) innovation in product assortment and the store experience. We believe this plan will enable the Company to drive long-term sustainable, profitable sales growth and create value for shareholders.