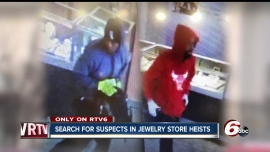 "The [jewelry] industry has seen 20 smash-and-grab robberies in jewelry stores since October, as a troubling trend that began in the Midwest has now spread to other areas of the country", writes Rob Bates of JCK. According to Jewelers’ Security Alliance (JSA) president John Kennedy, “The frequency and the number of these crimes are growing and growing. We think it’s very dangerous. This is really starting to erupt.” Bates says the thefts had been confined to the Midwest states of Michigan, Illinois, and Ohio, but recent data shows smash-and-grabs occuring in Kentucky, Massachusetts, Indiana, New York, Pennsylvania, and Missouri, hitting a variety of jewelers, from independents to chain stores. JSA president Kennedy says, “They are generally out of there in a minute or two. They are fairly skilled at hitting the right showcases."

Smash-and-grab robberies are not just an American problem by any means, though a quick search shows they seem to be more frequent than elsewhere (as is violent crime in general). The JSA reports that on January 10, 2018, five subjects entered a Ritz hotel in Paris and stole jewels from the hotel’s boutique. Three subjects were apprehended shortly after the heist, but two subjects are still at large. According to authorities, some of the subjects were armed with guns and axes; they smashed display cases and then took merchandise. In early January in Venice, thieves pulled off an audacious heist, stealing millions of dollars worth of Indian jewels in broad daylight from an exhibition at Doge’s Palace on the final day of a four-month exhibition featuring 270 items showcasing treasures from the time of the Mughal Empire. There was a major theft in Hong Kong last September. And, of course, few will forget the Kim Kardashian robbery in Paris.

The JSA has issued tips for jewelers to avoid being the next victims, such as: hiring armed, off-duty police officers, have a buzzer at the door, as potential robbers are usually dressed and equipped for the job, and install burglary-resistant, laminated glass and special frames in your showcases. These cases can withstand hammer blows and can keep losses down. They also suggest spreading high-end watches and diamond pieces among several showcases, rather than concentrating them in one or two showcases, and taking surveillance photos from eye-level cameras; they can provide excellent evidence for the police.