Michael Hill Jewelers To Cease Operations in US, Exit Market 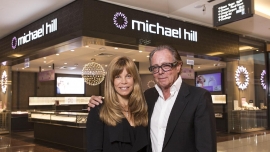 Brisbane-based retail jeweler Michael Hill has announced, "The complete exit of the loss-making retail operations in the US" as part of a set of strategic actions across its global retail network. The company, which "entered the U.S. market with considerable fanfare in the summer of 2008," according to JCK's Rob Bates, said in an ASX announcement that, "Since launching in the US in 2008, the Michael Hill US business has struggled to provide a return for the group despite significant investment into developing a viable business model." They added, "Notwithstanding new marketing initiatives to improve brand awareness and capture market share ... the challenging retail environment in the US has prevented the Company from improving its financial position." They have decided to reduce their exposure to the US market.

Michael Hill chief executive Phil Taylor, as reported in Stuff, said the US market was "difficult" and the fine jewelry sector was not performing well, as the company reported a 10 percent decline in sales in the US for the six months to December 31, 2017. "For us, it is especially challenging at such a small scale with only nine stores, across three states", he said. "Our proven retail model that has served us well in New Zealand, Australia and Canada has relied on achieving scale, and, in particular, with our marketing activity. This has been very difficult to replicate in the US." In the ASX announcement, he commented, “Our time in the highly competitive US jewellery market taught us a lot and helped to strengthen our core business including the development of our bridal collection strategy ... However, our US operations have not gained sufficient traction in recent years and the level of capital required to scale-up the business is not warranted under current trading conditions.”

US stores will continue to operate as the company negotiates and completes the exit of its US operations. Bates called it, "The end of nearly 10 years of struggle for the company, which has up until now seen success in every market it’s entered and once envisioned an 800-store chain of its distinctive purple-hued stores in America."