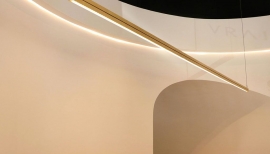 Vrai & Oro, the jewelry designer owned by laboratory-grown diamond producer Diamond Foundry, has closed its Los Angeles retail store after only six months. Despite several articles by the likes of Vogue announcing their partnership, and The Hollywood Reporter dropping Hollywood names like headliner Leonardo DiCaprio, the designer has come to the conclusion, "that retail is a true challenge." The Los Angeles fine jewelry label, which was purchased by Diamond Foundry in November of last year, opened a store in downtown L.A. at the ROW DTLA shopping center last August. It was first brick-and-mortar location for Vrai & Oro, which previously sold jewelry online only and markets itself as a company that sells to its customers without a retail markup.

Vrai & Oro wrote in a journal on their website, "Why We're Closing Our LA Retail Experience", that, "Closing our store was not what we envisioned, but it will allow us to stay true to ourselves and our values. In 2018, we are moving faster than ever and focusing 100% of our efforts on our digital experience which means improving our website, developing new technologies and thinking creatively about how to solve customer pain points." When it opened, founder Vanessa Stofenmacher said, “We view this store as an experiment and our plan is to test out this initial location before expanding into additional stores.” But as Rob Bates of JCK concludes, "Now it doesn’t seem like any expansion will be happening."