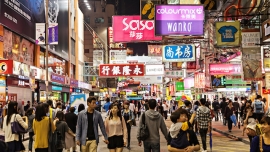 Leading Chinese jewelry retailer Chow Tai Fook reported a 5% year-on-year increase in same store sales (SSS) for the three-month period ended December 31, 2017 (Q3 FY2018) in its key markets of Mainland China and Hong Kong & Macau, reflecting solidification of the recovery in demand and increasing points of sale. Overall retail sales value in Hong Kong and Macau was flat year-on-year for the third quarter, but recorded 12% growth in Mainland China. Gem-set jewelry sales surged by 22% in Hong Kong and Macau, while gold products recorded an 8% uptick during the three month period, driven by the increase in average selling price (ASP), which was due to the increase in gold price and average weight per gold product sold. In Mainland China, CTF noted that e-commerce for jewelry continued to expand with a 57% year-on-year growth in value and a volume increase of 20%.

Continuing the trends established in Q2, SSS growth of gem-set jewelry in Mainland China declined slightly, yet same store ASP improved to US$933 (HK$7,300) (3QFY2017: HK$6,600). On the other hand, in Hong Kong and Macau, the improvement in SSS performance for gem-set jewelry was driven by an increase in both volume and ASP during the quarter, with the former recording a double-digit growth. Same store ASP was US$1,508 (HK$11,800). Last week, as Rapaport News reported, Hong Kong’s statistics bureau announced an 8% increase in sales of jewelry, watches and other valuable items in November, as consumer sentiment improved. The Group opened a total of 77 points of sale during the quarter, which included a net opening of 74 POS in Mainland China and 3 POS in Hong Kong, bringing the total number of POS to 2,565 as of 31 December 2017.