De Beers To Offer Grading Service in US 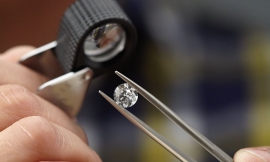 De Beers Group Industry Services has announced a new collaboration with leading US wholesaler, RDI Diamonds Inc., to become its premier source of diamond grading reports, the company stated in a press release. It will be the first time De Beers has provided grading services in the US.

Michael Indelicato, CEO of RDI Diamonds, said: “We were humbled to be approached by De Beers Group Industry Services for such an important opportunity: introducing the United States to this grading report. We have been blown away by the integration of unparalleled technology to ensure consistent and accurate grading. These grading reports are going to be a game-changer here in the States, and we are excited to be a premier partner.”