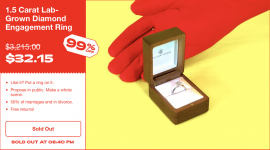 The card game company Cards Against Humanity has a long history of pulling Black Friday stunts, writes Laura Hudson for The Verge. "This year, Cards Against Humanity has decided to take its disdain for the capitalistic holiday to an absurd new extreme with a 99 percent off sale on a rotating series of expensive and spectacularly bizarre items," she writes. “Every ten minutes, a new deal will go live on this page," reads the official website. "Don’t be frightened by the deals. Just click and let the savings wash over you.” The company, famous for making politically incorrect party games, sold a 1.5-carat stone from Brilliant Earth for $32.15 - or 99% off its listed price of $3,215.

“Black Friday probably represents the worst things about our culture,” Cards Against Humanity co-creator Max Temkin told The Verge. “It’s this really repulsive consumerist frenzy right after a day about being thankful for what you have. So it’s always seemed like a really good subject for parody to us." Joshua Freedman of Rapaport News tracked down a company representative who assured him the sale of a diamond was a one-off. "We don’t typically sell diamonds,” Jane Benn, community manager at Cards Against Humanity, told Rapaport News. “This was just for our Black Friday promotion. We like to make a spectacle out of ourselves and hope people enjoy it.” Benn told Rapaport News that they did not inform Brilliant Earth about the stunt, “because we didn’t want them to be mad at us.” Brilliant Earth’s vice president for strategy and merchandising Kathryn Edison Money took it in stride, “While we did not participate in or know about the promotion in advance, we appreciate the humorous spirit in which it was intended. We would like to add that it was a very good joke.”