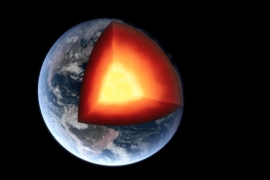 There may be more than a quadrillion tons of diamond hidden in the Earth’s interior, according to a new study from MIT and other universities. But the new results are unlikely to set off a diamond rush, writes MIT News. The scientists estimate the precious minerals are buried more than 100 miles below the surface, far deeper than any drilling expedition has ever reached.

The ultradeep cache may be scattered within cratonic roots — the oldest and most immovable sections of rock that lie beneath the center of most continental tectonic plates. Shaped like inverted mountains, cratons can stretch as deep as 200 miles through the Earth’s crust and into its mantle; geologists refer to their deepest sections as “roots.” In the new study, scientists estimate that cratonic roots may contain 1 to 2 percent diamond. Considering the total volume of cratonic roots in the Earth, the team figures that about a quadrillion (1016) tons of diamond are scattered within these ancient rocks, 90 to 150 miles below the surface. “This shows that diamond is not perhaps this exotic mineral, but on the [geological] scale of things, it’s relatively common,” says Ulrich Faul, a research scientist in MIT’s Department of Earth, Atmospheric, and Planetary Sciences. “We can’t get at them, but still, there is much more diamond there than we have ever thought before."

Faul and his colleagues came to their conclusion after puzzling over an anomaly in seismic data. Sound waves move at various speeds through the Earth, depending on the temperature, density, and composition of the rocks through which they travel. Scientists have used this relationship between seismic velocity and rock composition to estimate the types of rocks that make up the Earth’s crust and parts of the upper mantle, also known as the lithosphere. However, in using seismic data to map the Earth’s interior, scientists have been unable to explain a curious anomaly: Sound waves tend to speed up significantly when passing through the roots of ancient cratons, which led the scientists to speculate that the waves were passing through diamondiferous rock.

“Diamond in many ways is special,” Faul says. “One of its special properties is, the sound velocity in diamond is more than twice as fast as in the dominant mineral in upper mantle rocks, olivine.” The researchers found that a rock composition of 1 to 2 percent diamond would be just enough to produce the higher sound velocities that the seismologists measured. n a way, Faul says cratonic roots made partly of diamond makes sense. Diamonds are forged in the high-pressure, high-temperature environment of the deep Earth and only make it close to the surface through volcanic eruptions that occur every few tens of millions of years.