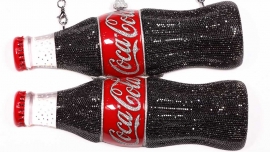 Coronet, a Hong Kong-based diamond jewellery brand has set another Guiness World Record, this time for the "Most diamonds set on a handbag" with nearly 10,000 embedded in a Coca-Cola-inspired accessory. This Coca-Cola bottle-shaped diamond handbag contains 9,888 pieces of natural diamonds, weighing 120 carats, and took 15 highly skilled craftsmen nearly 100 days to complete, showcasing the utmost creativity and extravagance, Guinness writes. The bag is set with 8,543 black diamonds and 1,345 colorless diamonds.

This is the third time Coronet has earned a Guinness World Records title following two other successful attempts. In 2015 they set the record for the "Most valuable guitar", a Gibson model set with 11,441 diamonds for 401.15 total carat weight, making it worth $2 million. In 2016, they set the record for the record for the "Most jewels on a guitar", set with 16,033 Swarovski gemstones on a Fender American Deluxe Jazz Bass, which was played by Jermaine Jackson. As Brecken Branstrator writes for National Jeweler, "The bag, with its whimsical design and many, many gems, resembles the work of well-known handbag designer Judith Leiber, who died this week at the age of 97. Her bags were often seen as objet d’art just as Coronet sees its own recent creation."