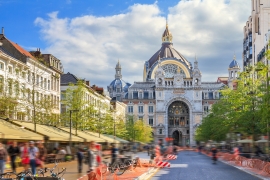 Antwerp’s September figures confirm a further, slow recovery of trade in the diamond city, largely due to increased activity in rough trading, as markets and manufacturing resumed and demand ahead of the holiday season grew significantly. Rough imports amounted to 7.8 million carats, for a total value of US$837 million in September, up 38% in value compared to the same month last year. Rough exports grew 20% in volume and 44% in value, to 12.3 million carats valued at US$1.1 billion compared to September 2019.

The stronger results of September continue to close the gap in difference with the same period last year, translating the impact of several months in which the global diamond trade was at a virtual standstill due to the ongoing pandemic, with imports of rough down 14% in volume and 26% in value, to 50 million carats and US$4.4 billion respectively, while rough exports decreased 38% in volume, or 48 million carats, and 41% in value, or US$ 4 billion from January to September.

Polished imports and exports also continued to improve in September, albeit at a slower rate, with both exports and imports of polished diamonds down 51% in terms of value and 41% in carats from January to September, year-on-year.