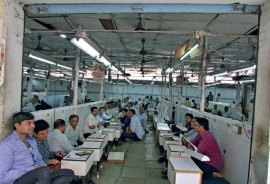 For a few days now, rumor in the industry has it that the Indian diamond industry - or at least some members - want to impose a voluntary ban on rough imports into the country. The rumours aren’t confirmed by any official body, but some sources claim the voluntary ban would start one week after India lifts the strict lockdown measures - preliminary scheduled for May 3 - and would be instated for one month, others claim the ban would last as long as three months.

The traders that are in favour of the ban hope the import stop will curb the free fall of polished prices and improve the dire cash flow position in the industry. During the 2009 crisis, the Indian traders imposed a similar 30-day ban on rough imports, after a period in which speculative buying drove rough prices to unreasonable high levels resulting in large inventories of unsold polished.

It is unclear if and how many traders will respond to the call for a voluntary ban.