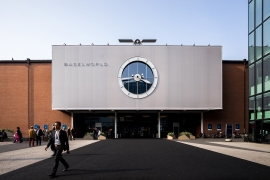 Five major watch brands, Rolex, Patek Phiippe, Tudor, Chanel and Chopard today announced they will be leaving BaselWorld. The exit follows a letter by Rolex topman Hubert du Plessix pleading for a refund for the brands set to participate in the canceled 2020 edition. In a joint statement, the brands announced they plan to start a new show, which remains unnamed, scheduled for April 2021, in conjunction with the organizers of Watches & Wonders (FHH).

Organizer MCH Group in a statement says it is surprised about the statements made by the five companies, claiming major brands, including Rolex, spoke out in favour of postponing the show to January 2021. In the press statement MCH Group says it "must therefore conclude that the relevant plans (to migrate to a new show, to be taking place in Geneva in April 2021) have been in preparation for some time and that the discussions concerning the financial arrangements for the cancellation of Baseworld 2020 are now being put forward as an argument." MCH Group states it will decide on the future of Baselworld and on further developing its plans to create a digital platform in the coming weeks.