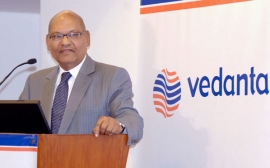 Two years after becoming the biggest shareholder of the firm that owns De Beers diamonds, metals tycoon Anil Agarwal announced an exit from Anglo American by divesting his near 20 percent stake. Agarwal, the founder and controlling shareholder in Indian resource giant Vedanta Resources Plc., in March 2017 paid $2.5 billion for a 12.43 percent stake in Anglo American, and then bought a second tranche in September 2017, bringing his stake in the mining group to 19.3 percent. The bonds were to mature next year but Agarwal decided to exercise a call option and take profits on his investment. He is said to have made about $500 million before costs from the deal.

"At the time of Volcan's (Agarwal's family trust) initial investment, I explained that this was an attractive financial investment in a great company with excellent assets and a strong board and management team," he said in a statement. "This has turned out to be the case, with our target returns achieved even sooner than expected. The share price of Anglo American has close to doubled since Volcan invested, delivering attractive gains to all investors." In a separate statement, Vedanta Ltd said its overseas subsidiary, Cairn India Holdings Ltd (CIHL) will exit its investments in Anglo American Plc. Following the redemption of the structured instrument, completed with due Board approvals, CIHL will have no further economic exposure to Anglo American plc shares.