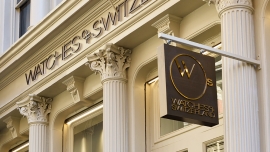 Watches of Switzerland went public on the London Stock Exchange last week, enjoying a better-than-expected debut. Shares are set to openly trade days after conditional trading started for the UK’s dominant luxury watch retailer. Watches of Switzerland (WoS) is owned by US private equity company Apollo Global Management and is the top UK seller of luxury timepiece brands like Rolex and Mayors. Under the leadership of chief executive officer (CEO), Brian Duffy, WoS’s sales have grown to make up 35% of luxury watch sales in the UK. The corporation’s 2018 revenue surged 22.5% to £773 million ($979 million).

According to the Financial Times, shares in WoS rose as much as 17% on their first day of trading after the group priced them towards the upper end of the published range. The group set its IPO price at 270p per share, and after the first day of trading last Thursday the stock was trading at 307p, increasing their market capitalization to £735 million ($931 million). Watches of Switzerland has spent the past few years investing around £60m ($76m) in its store estate and pushing into the US market, which Mr. Duffy described as “fragmented and dominated by smaller players who cannot fund the kind of investment in stores that we can.”

Speaking through a statement about the company's impressive stock debut, Duffy commented, "It’s been great. We [Watches of Switzerland] more or less went up 14 or 15%, and we’ve been as high as 17% up. Today’s (June 3) listing marks the next phase in our growth story. I am delighted by the reaction we have received from the market to our business and the significant opportunities that lie ahead," said Duffy. He noted that WoS will use its future IPO profits to eliminate debt. "The first use of its net proceed will be to pay down debts," said Duffy. ‘We had a level of debt that is acceptable in a private ownership scenario but is clearly not the kind of level of debt you would carry in a public environment, so £155 million of what we raise just went to pay down debt and that is the biggest single thing that has happened to our financial structure overall," added Duffy.