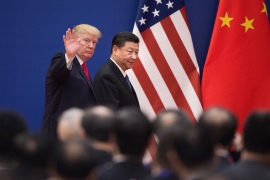 The list of Chinese products to be hit by 25 percent tariffs imposed by the U.S. government at the behest of President Donald Trump is expansive and is potentially about to cover the entirety of consumer products from China, including a broad swath of jewelry products, as the trade war escalates rapidly. On May 9, the U.S. Trade Representative listed $300 billion in Chinese products, spread among nearly 4,000 categories, that will soon be subject to tariffs of up to 25 percent. The list includes: diamonds and synthetic diamonds; precious and semiprecious stones; rubies, sapphires, and emeralds; silver jewelry; gold necklaces; synthetic gemstones; but also metals used in jewelry creation, such as gold and silver. On May 13, Trump called for the expansion of U.S. tarrifs to cover all $540 billion in Chinese imports.

As Rob Bates of JCK points out, figures from the U.S. Census Bureau show that in 2018, China imported into the United States $2.09 billion in jewelry, or 15% of all US jewelry imports; $233 million in gem diamonds, (1% of all diamond imports) and $1.01 billion in gemstones (33% of all gemstone imports). While Trump works to convince the American public about the great benefits of the trade war they are 'winning', if it turns into a longer fight, both sides will end up paying the price: consumer products will become more expensive and retail shops will come under pressure.

Some estimate that U.S. economic output would shrink by at least $120 billion “as companies would have to rebuild entire supply chains,” wrote Ian Shepherdson, chief economist for Pantheon Macroeconomics, in an investor note. Analysts at UBS Group have said that additional tariffs on consumer goods could cause “widespread store closures”, estimating approxximately 12,000 closures. "We think potential 25% tariffs on Chinese imports could accelerate pressure on these company’s profit margins to the point where major store closures become a real possibility,” UBS analyst Jay Sole said in a research note.