ALROSA Convinces Chinese Jeweller To Trade In Euros Instead of Dollars 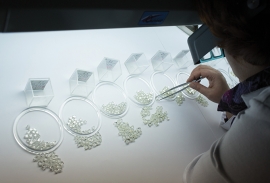 Searching for a means to safeguard smooth transactions in the event it ends up having US sanctions imposed on it, Russia's Alrosa, the world’s largest producer of rough diamonds, has found a partner in its efforts to conduct trade in a currency other than the US dollar. Evgeny Agureev, Alrosa’s director of sales, told the South China Morning Post that it has enlisted one of its many Chinese customers - Chow Sang Sang Jewellery - on a long-term contract this year. He did not disclose details such as volume and prices to the newspaper, but officials from both organizations said they will trade in euros as part of a pilot project. Alrosa's pilot project extends beyond China, a spokesperson told The Diamond Loupe last summer, as the miner has been exploring transactions in rubles with India, China and potentially Europe.

The Trump administration has imposed sanctions on over 200 Russian businesspeople, officials, banks and companies the US considers as “suspected serious and continued threat” to its security. An Alrosa spokeswoman told SCMP that although the company is included in the so-called “Kremlin list” for possible sanctions, it has not been affected by any sanctions and has maintained its operations in the US last year. Eric Ng of the SCMP said Chow San Sang’s signing is a positive start for Alrosa as the miner prepares for a tough year amid a slowing Chinese economy and an ongoing trade war with the US.

“The China market is very important for us ... selling directly here has been a difficult journey, as people here like to start with small quantities and gradually build up their trust,” Agureev said. However, a A Chow Sang Sang spokeswoman has said the company is not entirely convinced about dealing in a currency other than the traditional US dollars. “We started a small euro trade as pilot. There is no advantage so far by trading in euro,” she told the Post. Along with the rest of the global diamond miners, Alrosa experienced a downturn in sales in the fourth quarter of 2018 and in the first two months of this year, and is aiming to avoid a sales decline in the world’s second largest economy in 2019, Agureev said. “Usually the first quarter is the biggest sales season,” Agureev said. “We are not talking about growing, we are talking about stability ... the past two months have been absolutely different from the previous two years.”

The company has set itself a sales target of US$180 million in the China – the same as last year. China accounts for 4 per cent of its total sales. “This year will be tough for sure for all players, and it will present different dynamics and volatility ... China’s economy is still growing, but not as fast as before, and end users have reduced spending on luxury items since the fourth quarter amid uncertainties brought on by the US-China trade war,” he said. Sales are likely to improve in April once there is some clarity on the trade talks and global economic outlook, he added. According to the SCMP, retail revenue in mainland China rose 8.5 per cent during the Lunar New Year holiday, down from 10 per cent last year, which was the lowest growth rate since the government began publishing holiday sales data a decade ago.