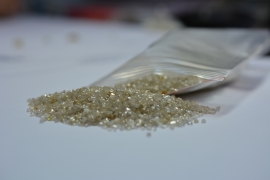 In an open letter to diamond traders, the UK's Foreign and Commonwealth Office addresses the possibility that the UK will temporarily be unable to import and export rough diamonds if the nation leaves the European Union without an exit deal. At the moment, UK traders can trade in rough diamonds within the EU and to countries in the Kimberley Process Certification Scheme, which regulates the international trade in rough diamonds. The EU is a participant of the Kimberley Process (KP) and acts on behalf of the UK. This arrangement will change, however, once the UK leaves the EU on 29 March 2019, at which point the UK is no longer represented by the EU with regard to the KP. Deirdre Brown, Head of the Multilateral Policy Unit writes that while a no-deal exit is "unlikely", traders will need to prepare themselves for trading internationally in rough diamonds once the UK leaves the EU.

The "most likely scenario" is one where a deal is struck with the EU that provides for an implementation period, during which the UK is to be treated as a Member State for the purposes of international agreements while the implementation period is in effect. This would include the KP. At the end of this period, the UK would then move to independent UK participation. However, the reality is that a deal has not yet been struck, and the UK could exit the EU without a deal or immediate independent participation. "In this very unlikely case," she writes to the traders, "you would not be able to trade internationally in rough diamonds until we had secured our KP participation. To prepare for this scenario, you should consider whether you wish to make arrangements to have any rough diamonds on consignment or loan to countries in the KP (including the EU) returned to you before the UK has left the EU to avoid delays until we secure independent participation,” she continued.

While the UK’s rough imports have declined significantly since De Beers moved its sightholder sales from London to Gaborone, Botswana, in 2013, some miners still send goods to London before shipping them to Belgium. The Antwerp World Diamond Centre (AWDC) has said, “These goods are then transported through the EU common market to Antwerp to be sorted and traded here. It is AWDC’s goal to ensure that these trade flows continue to pass through Antwerp, even after Brexit.” The U.K. is currently just one of six EU countries allowed to import and export rough diamonds. Once stones enter one of those nations, which include Belgium and Portugal, they’re then free to move around the region.

The Herald Scotland spoke with diamond trader Roddy Sheridan, of Glasgow-based Blair and Sheridan, about the fall-out Britain's March departure from the EU will have on the UK trade's relationship with Antwerp, the heart of the European diamond trade. His take is that Brexit uncertainty and the weak pound are having a "massive" impact on the precious gems trade, particularly since some precious stones of the quality he requires can only be sourced from Antwerp. "Antwerp is the hub of the diamond industry, that is where the best goods come from," he said, but the currency issue is taking a bite out of his profits. Sterling had been trading at above $1.50 before the referendum, and was at $1.29 on Friday. He said: "If we are buying diamonds in dollars and we are buying packaging and pearls in euros, for the pound to have gone from $1.50-ish down to $1.20 something is massive."