U.A.E. Eliminates VAT on Diamonds and Gold at Wholesale Level 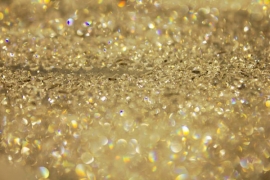 The United Arab Emirates (UAE) Cabinet has announced that it is reversing the 5 percent value added tax (VAT) for investors in gold, diamond and precious metals at the wholesale level. Doing so will “contribute to stabilising the gold and diamond sector in the UAE as well as stimulating investment in this sector”, a statement said following the Cabinet decision. The move, which goes into effect immediately, is expected to ease the pressure on gold and diamond traders in the country. Retailers will continue to impose 5 percent on all jewelry transactions taking place at their shops. However, market sources say the move could spark a gradual revival in consumer sentiments for gold and diamond jewelry purchases, as in theory jewelry retailers would pass on the VAT benefits they receive from wholesalers in setting the price on their pieces. This way, shoppers will receive their share of the benefits.

The Emirates News Agency (WAM) reported that the VAT roll back was a part of an effort by the government to improve the ease of doing business in the U.A.E. The government has specified it as a “VAT reversed charge” mechanism. Under the mechanism, entries of five percent VAT will be documented in the books of both buyers and sellers, but there will be no payment of the fee.

The gold, diamond and precious metals sector is one of the vital national economic sectors, writes WAM, and one of the most important for the economic diversification that is expected to witness significant growth in the coming period as part of the UAE’s diversification objectives. The reversal comes after exceptionally difficult circumstances in the jewelry retail trade through the first four months of the year. The vice chairman of the industry association Dubai Gold & Jewellery Group, Chandu Siroya, told Arabian Business Sources that wholesale gold jewelry sales in Dubai fell 50 to 60 percent in the first quarter from a year earlier after VAT began on January 1. Other sources say gold sales are down by 30-40 per cent from a year ago, with the January decline being in the range of 50%. The last major spurt in gold jewellery buying took place in the five days from December 26, 2017, which coincided with the start of DSF 2017. Gulf News writes, "For Dubai, known for its close association with the allure of gold, the VAT rollback - even though a partial one - will be of particular significance. The 5 per cent VAT plus the 5 per cent import duty had eroded much of the price advantages jewellers had compared to what they were in India and the rest of the subcontinent."