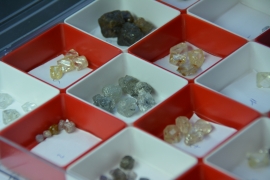 After shooting out of the starting blocks in January with significant increases across the board, imports to and exports from the diamond capital came back down to earth in February, following De Beers' pattern from its second sight of the year where rough sales fell 17% from January. According to figures published by the AWDC, February rough diamond exports fell 21% in volume and 6% in value to $1.02 billion from $1.09 billion in February last year. However, there was a notable rise in price per carat, as rough exports increased by $7.5 million compared to last month, despite a nearly 1.4 million carat decline in volume. The story was the same with regard to rough imports, as they fell 28% in volume but less than 5% in value compared to February 2017. For the first two months of the year, rough exports are down 8.6% in volume and 3.8% in value at $2.04 billion; rough imports have declined by 8.6% in volume while their value has risen by 5% to $1.96 billion. The total rough trade has been flat thus far in 2018, at $4 billion ($3.99b compared to $3.98b in 2017).

Meanwhile, the polished diamond trade, at least on the export side, was skewed last month as a result of the Hong Kong International Diamond, Gem & Pearl Show, as companies export large amounts of diamonds to display and sell at the show. So, while polished exports, at $1.3 billion, increased by 57% compared to January, they declined 5% in volume and 6% in value year-over-year, as more goods were shipped to Hong Kong in 2017. Polished diamond imports increased year-over-year by 8% in volume while declining 3% in value. For the first two months of the year, polished diamond exports have increased 4% in volume and 5% in value, now standing at $2.1 billion. Meanwhile, polished imports have jumped 16% in volume so far this year, for a 3% increase in value to $1.7 billion. The total polished trade has risen to $3.77 billion from $3.61 billion during the first two months of 2017.