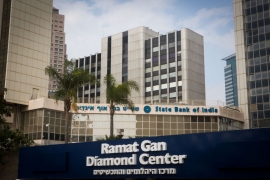 Israel's diamond trade decined in terms of the volume and value traded for the third straight year, according to Israel's Ministry of Economy and Industry as reported by Rapaport News. The industry's polished exports fell 4% on the year to just under $4.5 billion, while volume of polished exports fell 6% to 1.7 million carats. Rapaport further notes that exports to the US, the largest market for the Israeli diamonds, declined 7% to $1.69 billion, while shipments to Belgium bounced back, surging 20% to $420 million. However, the average price for polished exports increased 2% to $2,588 per carat. Meanwhile, polished imports fell 11% to $2.92 billion

Israel's rough diamond trade fared even worse, as rough imports tumbled 12% to $2.85 billion, while exports declined even more preciptously to 18% to $2.23 billion. In an effort to jumpstart the declining Israeli diamond trade, guarantee $284 million in loans to alleviate a credit crunch that is hurting their competitiveness. The perception of Israel's diamond trade as high-risk, due to an increase in compliance risk in general, and in the Israeli industry in particular (the Underground Bank case, the determination of tax offenses as predicate offenses regarding money laundering, financial statements without a flawless professional opinion from an accountant, and more), has led to a decline in total lending to the Israeli trade from $2.5 billion in 2008 to about $1 billion last year.