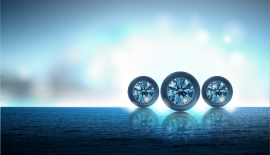 The Israel Diamond Exchange is turning to digital currencies to inject new life into a marketplace, in the hopes that the introduction of virtual currency will make trading more efficient and less opaque. The two new cryptocurrencies are backed by gems: the first, called Cut, was launched last week for use between dealers in the diamond market. Citing a recent report by Israel’s Justice Ministry, Reuters writes that current transactions are “often carried out anonymously, with the shake of a hand and minimal documentation”. That murkiness has led the FBI and Europol to target the trade as a vehicle for money laundering and crime financing. Narrow profit margins between rough and polished gems make it hard for polishers to get financing, and banks have cut back lending or pulled out entirely. Backers of the digital currency program believe it will help address those issues.

“We foresee alignment behind this currency because it’s going to make things easy,” Eli Avidar, managing director of the exchange, told Reuters in an interview. “This industry is facing challenges, and this is going to in a lot of aspects address those challenges ... the profitability element of the business, the speed of doing business, money laundering aspects and the problematic elements of banking nowadays,” he said.The Cut bitcoin will be available only to dealers on a peer-to-peer basis. Traders from around the world will receive digital wallets after being vetted by the exchange, similar to today’s background checks. Each transaction will be verified in a matter of minutes and be available to the public on blockchain - a digital ledger maintained by a random group of peers - but the identity of who owns what will be kept private. The exchange can provide that information to regulators upon official request.

One diamond trader told Reuters the following: “Transfers of money have become increasingly difficult. With banking regulation, even the smallest move becomes complicated. It can take days,” said the dealer, who asked not to be identified. “Buyers don’t want to give the money till they get the stone, and sellers don’t want to give the stone till they get the money.”A spokeswoman for the Economy Ministry, which oversees the diamond trade, says there has been no in-depth discussion yet on how the coins would be regulated. Presale of the Cut went live at the International Diamond Week that started on Monday. The coins should enter into use within a few weeks, said Avishai Shoushan, CEO of the year-old CARATS.IO, which created the coins for the exchange. A second coin, Carat, will be issued later and is meant for institutional and retail investors who want to invest in the diamond market without taking possession of physical diamonds. “We are creating a way for people to invest in the market without actually buying and selling diamonds,” Shoushan said.