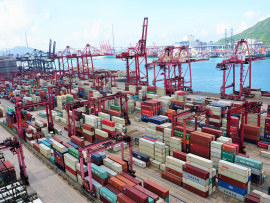 The value of Hong Kong's total exports of goods during the first quarter of 2020 declined by 9.7% over the same period in 2019, with exports of jewelry ("miscellaneous manufactured articles (mainly jewelry, goldsmiths' and silversmiths' wares)") falling by $10.5 billion or -20.4%, according to the government's Census and Statistics Department. In March alone, year-on-year the jewelry category declined by $3.7 billion or -20.8% compared to a 5.8% decline in the value of total exports of goods decreased from the special administrative region.

A government spokesman said that merchandise exports remained weak in March, and while exports to the Mainland rebounded alongside the gradual resumption of economic activities there, exports to many other major markets, including the US and EU, plunged further. Looking ahead, as COVID-19 has spread across the world since March and caused a severe contraction of global economic activity, Hong Kong's merchandise exports will remain under notable pressure in the near term.