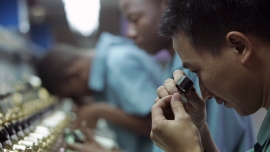 Eurostar Diamond Traders, one of the largest diamond companies in Antwerp, last week was declared bankrupt by the Antwerp Corporate Court. The manufacturing company, established in 1978 by Kaushik Mehta, said to have debts reaching up to half a billion euro ($560 million).

Eurostar was until recently the largest diamond company in Belgium, with turnover of 2.5 billion euro ($2.8 billion) in 2014 and 1.6 billion euro ($1.8 billion) in 2016. The company was a global player in rough diamond polishing, with subsidiaries in New York, Shanghai, Botswana, Hong Kong, the UEA and india, but in recent years, the group saw a drastic decline in sales and started having problems with major banks in the diamond industry. The court also denied its request for protection from creditors, which include Bank of India, ABN Amro and Standard Chartered. in September last year, Eurostart had claimed that it had diamond reserves worth nearly $150 million, but two months later it admitted in court that the reserves were valued at only $25 million.

According to the court, which dismissed a request for a legal reorganization of the company in early March, the company no longer has marketable diamond assets, and thus no viable future. Eurostar is said to have blamed it difficulties on declining demand for diamonds, on the miners which had driven up the prices of rough diamonds on, a lack of financing due to the large banks turning their backs on the diamond industry and the banks being too aggressive in demanding repayment of debts.