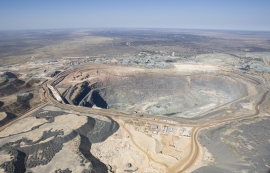 Diamond-rich Botswana expects mineral revenues in the 2019/20 fiscal year to drop by 4 percent to 13.6 billion pula ($1.26 billion) due to a decline in royalties and dividends, a minerals ministry budget document showed last week. Botswana is heavily dependent on its diamond resources which, according to the World Bank, is responsible for 25% of the country's GDP, approximately 85% of exports earnings and about one-third of the government's revenues. Consequently, fluctuations in the global diamond market have an immediate impact on this African success story, which is why the country's push toward diversification of its economy is so urgent.

Mineral Resources Minister Eric Molale said in the document that global diamond demand was showing signs of slowing down. Retail jewelry sales fell during the last quarter of 2018, he said, while polished prices continued to decline into the beginning of 2019, albeit at a slower rate. “Trading and prices of diamonds are expected to remain subdued during the first quarter of 2019 due to significant overstocking of small polished diamonds,” Molale said in the document presented to parliament. Debswana, a joint venture between Anglo American’s De Beers and Botswana, produced 24.1 million carats of diamonds in 2018, a 6 percent jump from the previous year. The company is the largest contributor to Botswana’s government revenues.