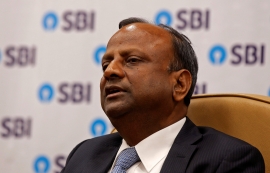 The latest fallout from the Nirav Modi-Gitanjali scandal that has rocked India's diamond and jewelry sector comes in the form of the State Bank of India's (SBI) decision to tighten the collateral demands on borrowers from the industry. India’s largest lender has told borrowers in the gems and jewelry sector to either bring in more collateral to back their existing loans or reduce the size of them in a timely manner. According to The Economic Times of India, the decision was driven by the board which directed management to plug the gaps in risk mitigation system, especially for borrowers in the jewelry sector which has been under intense scrutiny since Nirav Modi's nearly $2 billion fraud was detected by the Punjab National Bank.

The SBI has reviewed all loans given to jewelers since the outbreak of the fraud scandal to find out whether adequate safeguards were taken while giving the loan. If this turns out not to be the case, the bank has instructed its borrowers to raise the collateral level to at least 40-50% of the loan value or cut the size of the borrowing by half. Earlier, loans were given on easier terms with 10-15% collateral, but mouting pressure has forced a coreection. “In principle, we review the underwriting system whenever delinquency comes into question,” said SBI dputy managing director Sunil Srivastava. “It’s a practice to tell borrowers to infuse more equity in the business or increase the collateral to back the loan, whenever there is weakness.” SBI has also demanded a definite plan from these borrowers on how they are going to implement this. The move by the SBI is likely to be followed by other lenders, which in turn, may dry up funds flow to the gems and jewelry industry.

Some people in the trade fear that with the banks growing increasingly wary of lending to the sector in India, cutting and polishing units, which employ thousands of people, may move out of the country - with China trying to lure them away. According to those in the trade, China has been aggressively pursuing Indian diamond cutting and polishing units to set up facilities in the country. “Apart from cheaper labour the Chinese are offering better infrastructure,” says the owner of a mid-sized diamond polishing company with units in Mumbai and Surat. It should be noted, however, that China has been trying to lure Indians away for several years now, and few companies have taken the bait. It has been suggests that the big players with operations in Antwerp, Israel and elsewhere may be tempted by the Chinese, who are also setting up cutting and polishing facilities in African countries like Zimbabwe, where the cost of labor is much cheaper than in India.

MG Arun, in an extensive article recently published in India Today, "Diamonds in the dust", details many of the factors that have led to the current situation, from taxation changes to shady practices by diamantaires and banks alike. Nainesh Pachchigar, a Surat-based diamond merchant and chairman of the gems and jewelry committee of the South Gujarat Chamber of Commerce and Industry, says imports have shrunk since loans from nationalised banks dried up in the aftermath of the scam. Moreover, the demand for diamonds from India has slipped in the past few weeks as customers have grown wary of purchases from the country. "There is so much cross-checking now, it has created a liquidity problem for the business," says Pachchigar. "Only 5-10 per cent of the entire loan submissions are being entertained." He fears a crackdown on the sector will also stifle companies doing legitimate business.

Mahendra Gandhi, president of the Mumbai Diamond Merchants Association, says business is now being done only after submitting 100 percent collateral (assets worth the entire value of the loan) to banks for procuring loans. "We are telling all our members to be cautious henceforth, and to take KYC (know-your-customer) details from all our clients, so that we know exactly who we are dealing with," he adds. This is not a problem that just cropped up. Arun writes, "Although the Modi and Choksi frauds, along with the Winsome Diamonds case where promoter Jatin Mehta allegedly duped Indian banks of Rs 6,800 crore, have exposed the dark underbelly of the Indian diamond business, the rot runs deeper than previously estimated. Not many in the industry are surprised at the recent exposures; fraudulent transactions, they say, have been taking place for years."

"While Modi has been accused of raising letters of undertaking (LoUs) from Punjab National Bank with no underlying collaterals to borrow money from the overseas branches of counterparty banks," he continues, "the industry is plagued by other malaises such as 'round-tripping' where loans are raised using fake invoices, or 'over-invoicing' - using inflated purchase bills to raise more money from banks than what's actually paid for. While these practices thrive in many businesses, the sheer brazenness with which the diamond trade employs them is shocking.

"Such activity has become rampant in the past decade," Arun quotes an industry observer as saying. For instance, a merchant raises a letter of credit (LoC) from a bank showing the import of a particular 'parcel' of diamonds. Once he gets the money from an overseas bank based on the LoC given by his bank in India, he uses the same parcel to raise money from another bank. For this, he submits invoices from different importers. Except that these importers are his own companies and the invoices fake. A recent sting operation by India Today TV's investigation team revealed how certain agents in the trade bragged about their 'connections' with bankers that helps them raise money on these fake invoices. "There is no real hira (diamond) here, just some companies on paper and a few invoices," says one agent.