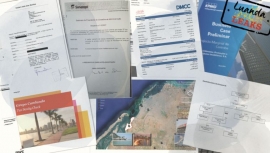 Luanda Leaks, a new investigation by the International Consortium of Investigative Journalists (ICIJ) and 36 media partners, exposes two decades of unscrupulous deals that made Isabel dos Santos Africa’s wealthiest woman and left oil- and diamond-rich Angola one of the poorest countries on Earth. Ms. dos Santos, daughter of former president and autocrat José Eduardo dos Santos estimated to be worth over $2 billion, claims she is a self-made woman who never benefited from state funds, despite the fact that over the years her father had awarded her companies public contracts, tax breaks, telecom licenses and diamond-mining rights. Now, the ICIJ has shared a trove of some 715,000 documents with leading media outlets.

It shows how a global network of consultants, lawyers, bankers and accountants helped her amass that fortune and park it abroad. Some of the world’s leading professional service firms — including the Boston Consulting Group, McKinsey & Company and PwC — facilitated her efforts to profit from her country’s wealth while lending their legitimacy, writes the New York Times. The scope of the corruption is complicated and breathtaking, stretching across the globe. The ICIJ describes it as a web of more than 400 companies and subsidiaries in 41 countries linked to Isabel dos Santos or her husband, Sindika Dokolo, including 94 in secrecy jurisdictions like Malta, Mauritius and Hong Kong. It took teams of money-laundering experts and forensic accountants to unravel the details.

The noose around the neck of the corrupt couple has been tightening in the two years since President dos Santos resigned and President Lourenço assumed power, determined to take on corruption and wipe out the legacy of his predecessor and reform Angola. In the closing days of 2019, Angola froze the assets of Ms. dos Santos, in a sign that the country’s current president is taking a tougher line against the former first family. In 2018, he offered diamond exploration licenses that previously belonged to dos Santos to Angolan and international investors and changed the country’s diamond marketing policy to allow companies to sell diamonds to international buyers of their choosing, rather than to ‘preferential customers’ with links to the government. In an earlier move to pry Angola's diamond interests from the clutches of the dos Santos family, Angolan state-owned diamond company Sodiam also divested a stake in Swiss luxury jeweler De Grisogono - controlled by the husband of Isabel dos Santos - for “reasons of public interest and legality.”

The de Grisogono story, highlighted by the ICIJ, The Guardian and others, is a cautionary tale of squandering state resources. De Grisogono, a high-end Swiss luxury jeweler, had fallen on hard times during the global economic crisis. In 2012, a search for investors to take on the debt and restructure the business led to Angola and a partnership between Sodiam and Melbourne Investments, a private business ultimately owned by dos Santos’ husband Dokolo. Between them, the documents show, they co-owned two Maltese companies, Victoria Holding Limited and a subsidiary, Victoria Limited. These took over the lion’s share of the jeweler’s Luxembourg parent, DG Holding, and with it the business, and debts, of the high-end brand, buying out an existing debt and paying 3.5m Swiss francs into the company.

On paper, Victoria Holding Limited was a 50/50 venture between Melbourne Investments and Sodiam. Documents suggest that in practice, however, the Angolan state appears to have provided most, if not all, of the funds that made the purchase of De Grisogono possible. In February 2012, in the days before the De Grisogono deal went through, Sodiam transferred $45m-worth of loans to Victoria Holding Limited, which was used to pay off the jeweler’s debt and provide investment. It thus appears then that state diamond marketing company Sodiam was instrumental in buying and financing the De Grisogono investment, exposing itself to huge loans to pay for the purchase of the company and its ongoing support. Despite its financial investment, however, Sodiam took no role in deciding how De Grisogono was run.

In October, ICIJ media partners interviewed Sodiam Chairman Eugénio Pereira Bravo da Rosa in Luanda. Bravo da Rosa, who was appointed to the state diamond company in November 2017, said that Sodiam “has not profited one single dollar” from its investment in de Grisogono. He criticized the deal that put Dokolo in charge of the jewelry company and left Sodiam without a management role. “It is strange,” Bravo da Rosa said. “I can’t believe a person would start a business and let its partner run the business with total power to make all the decisions.”

Concern about this arrangement was expressed in an announcement by the country’s government last month saying it was freezing the couple’s assets, and accusing them of making, and hiding, money at the state’s expense. The decree included a claim that Sodiam is owed $147m for loans used to prop up De Grisogono, money it borrowed from a bank linked to Dos Santos at a 9% interest rate. By the time Sodiam pays off loans it took out to participate in the deal, he said, it will have lost more than $200 million. Sodiam, which in 2017 announced its intention to divest its interest in de Grisogono, is still trying to figure out what happened, Bravo da Rosa said. “That is the question we are continually asking,” he said. “What has been done with the money?”

The decree also alleged that Dokolo and Dos Santos were able to buy diamonds from the state at below market value, via several companies linked to Isabel dos Santos and her husband which were given the status of “preferential buyer” with Sodiam. The prosecutors claim these companies were able to keep the profits from the sales, while the Angolan state lost out. The 'preferential buyer' system has been an open secret for years in the Angolan diamond industry, one that President Lourenço set out to abolish by opening up Angola's diamond sales to the international market. It is generally accepted in the industry that Sodiam undersold their rough diamonds to their ‘friends’ – whether De Grisogono, Victoria Limited or traders in a diamond trading centre that does not check the value of a diamond upon import – thereby facilitating a healthy profit. The couple have denied the claims and say they are the victims of a political “witch-hunt”. In December, Dokolo launched legal action against Sodiam at a London arbitration tribunal, claiming he had lost $120m in the venture.