The Journey of Light Inside a Diamond: In-Depth with Gabriel Tolkowsky 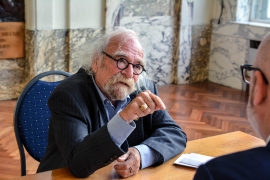 Sir Gabriel Tolkowsky is one of the greatest diamond cutters of all time. His many accomplishments include the fashioning of the priceless, 273.85-carat Centenary Diamond, cut from a 599.19-carat rough stone, which is still the largest D Flawless diamond in history, and the Golden Jubilee Diamond, the largest faceted diamond in the world at 546 carats. Sir Tolkowsky - known as Gabi - is also renowned for creating the “Flower Cuts” for De Beers, which accentuate the brilliance of typically lower-quality and lower-color stones with their unconventional angles and facets.

Gabi Tolkowsky was employed by De Beers from 1975 to 1995, and in 1987 - after inspecting the rough 'Centenary Diamond', was requested to organize a team of master diamond cutters and scientists to cut and polish this fabulous diamond. To achieve such a task, he obtainted the large ‘Unnamed Brown’ that would become the Jubilee, not only because of the difficultly of the stone, but also to test special tools and cutting methods that were being developed for use on the D-color Centenary stone. Together, those two diamonds took three years to complete. The Diamond Loupe sat down with Gabi Tolkowsky in the Antwerp Diamond Bourse on the occasion of the 100-year anniversary of the brilliant cut diamond, invented by his uncle, Marcel Tolkowsky, in 1919.

The Diamond Loupe: You grew up in the most famous diamond polishing family in the history of Antwerp, with a legacy in the business stretching back some 200 years. Would you say diamond polishing is in the family genes?

Gabi Tolkowsky: In the Tolkowsky family, the youngsters, including my father Jean and my uncle Marcel, started polishing diamonds with their fathers when they were about the age of eight or nine. They immediately came to appreciate the beauty and uniqueness of a diamond and learned how to bring out the beauty of each rough diamond, its absolutely unique character, inclusions and all.

Marcel paved the way for all of us that came after him. In 1919, when he was just 19 years old, he unlocked the secret of light within a diamond. He discovered the mathematical formula for the ideal cut diamond - the Tolkowsky brilliant - creating the 57-facet stone, the standard for releasing all the beauty of a diamond. He figured out how to get the greatest amount of light to shine out of a diamond, calculating the number and arrangement of facets to maximize the light return. This was Marcel Tolkowsky’s gift to the world, perfecting the "journey of light", giving all those who came after him the knowledge of how to turn a diamond into a ‘unique beauty’.

The DL: Tell us about some of the key moments in your career as a diamond cutter.

GT: The first was when I was just a young man, 16 years old, sitting across from my father in a really old polishing shop here in Antwerp. He gave me a polished stone, a 100-carat emerald cut. There was a tiny scratch on one of the facets at the bottom side of the diamond, which is one of the hardest things to polish without losing any of the facet's precise shape and weight! It was my job to smooth out that tiny scratch without altering anything else, adding the final touch. I will never forget it, the challenge, and the responsibility of knowing it was in my hands.

The second is when I led a team of 15 people, working in a basement in South Africa. The job was to polish two stones in three years: the Centenary Diamond and the Golden Jubilee, or the ‘Unnamed Brown’ as it was called then, a 756-carat rough diamond. It was a difficult job, and these diamonds were to be the symbols of the achievement of the world’s greatest diamond company. I had to make it happen, together with my team. I will never forget how I worked on the Centenary for 154 working days - an entire working year - carving and carving away with my bare hands. I removed more than 50 carats before we started polishing. I spoke to Marcel about the challenge and the stress, and you know what he said? “Gabi, young man, go for it!”

The DL: It is hard to imagine now that diamonds were cut in this way. Has technology lowered the bar for what it means to be a master cutter?

GT: A master cutter is somebody who, when he takes a diamond between his two fingers, first speaks to the diamond, in whatever language. It’s an internal dialogue. His challenge is to unlock the "journey of light" inside the diamond. The attraction of that idea overcomes you. So, each cutter is going to work differently. The technical approach is practically the same. You have the tools, the machinery … but on top of that, you need to have the feeling.

The rapid development of software and the machines has made polishing a high-tech profession, but the machines do not have any feeling. These days, the preparation has to create this kind of feeling, instill it in the process. Is it really the same? No. But diamond cutting and polishing is still an art. Sometimes it is best to leave a small, visible sign of the natural rough stone, and sometimes the master will say we must remove everything, cutting away everything and leaving it perfectly polished. Being a master cutter means knowing when it is finished.

The DL: The ‘master’ aspect comes from the planning and the vision rather than the execution?

GT: A master cutter is definitely a master of the execution, but they are typically managing a team of incredibly capable people, perhaps even more capable than the master in cutting. His ability to see in advance what is going to emerge from his creation involves a management aspect, taking responsibility. If anything happens, even an accident - say the cleaning crew leaves a window open at night that no one notices, and the cold morning wind hits the tool that hold the diamond during polishing and the diamond breaks - it’s ultimately his responsibility.

The DL: What do you think the increasing automation is doing to the polishing profession?

GT: The machine is a fabulous invention for productivity and getting consistent results because it works mathematically. You program it, and that program is managed by a technician. He is a diamond cutter, but he only touches the stone when it is necessary. The technology is fantastic for producing large quantities of diamonds, but sometimes our trade goes to sleep. It’s cyclical. Do you always need the volumes the machines can produce? No. Which brings you to the question of how much does it cost? It is very expensive to polish diamonds by hand, so you are losing the master cutters, which is a very bad thing.

The manufacturing industry is often concerned with polishing as fast as possible, because that saves money. Everything must go so quickly. But what happens if you have to stop for whatever reason, for maintenance, or something like that? It costs you much more money. When the industry slows down, the only one who can continue is the artisan. If you need a diamond polished for a customer – not 10 customers, just 1 or 2 or 3 – are you going to put the whole system in motion? Of course not. So, don’t forget the artisans.

The DL: The Indian manufacturers in particular are in a bit of bind right now; they are getting squeezed by the miners and more and more by the retailers who do not wish to hold stock. Do you think they might at some point have to deleverage to balance out the system? How do you see this developing?

GT: Frankly speaking, I am aware of some problems and they start with capital. The Indians have made significant efforts to produce the quantities that were needed, but some of them probably speculated and decided to continue at that pace even when the market slowed. If you cannot get return on investment, enough turnover, you cannot continue. They are suffering through the same things as we are but for different reasons, and with different consequences. The problem of India is not only a professional problem but a humanitarian problem. Indian manufacturers employ large numbers of people. Some Indian companies ran schools, hospitals, took care of the elderly, developed housing so the elderly could live together with the children and take care of them. It was not just about cutting diamonds. But they cannot fully succeed if the marketing of jewelry does not change.

Jewelry must adapt to what the people want. This is not just an issue for India, of course. In diamond centers around the world, committees are meeting to figure out what to do. In my opinion, it all starts with the combined efforts of two sectors: the jewelry and the manufacturing sectors, together with a common marketing power and money. Look at those four big issues. That’s enough. But we need to address them together, and nobody does that anymore.

The DL: What is your proposal?

GT: In Antwerp, for instance, we should do what we have done in the past: combine the efforts of the manufacturers and jewelers, together with marketing power and capital. You need to have the support of capital. You need a mutual understanding. You must create a plan together, go to the bank and present a plan. The problem is easy to understand. We have to understand the new generation.

DL: How do you envision the future of the diamond industry?

GT: In the past, De Beers was the leading company that managed the world diamond trade, and then it changed. Why not come to a level of understanding, technically and financially? Come to a mutual understanding, work together and head into the future, together. ALTOGETHER. That is the way. 'Beauty is altogether in the eye of the beholder!'

Overall, I would say I am optimistic. I would not use the word beauty if I wasn’t optimistic.